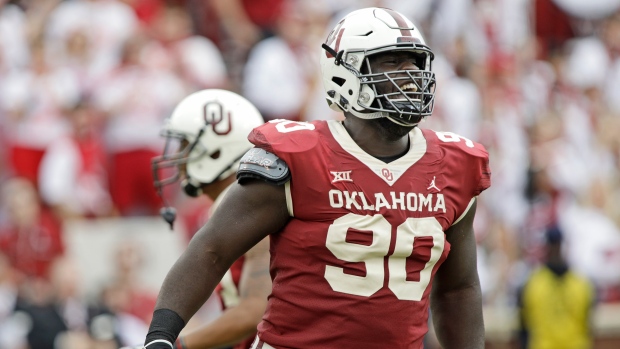 Canadian defensive tackle and NFL prospect Neville Gallimore has a chance to accomplish something this month that players from north of the border rarely accomplish: being selected in the first round of the NFL draft.

Gallimore, who hails from Ottawa and played collegiately at the storied University of Oklahoma, has a real shot of being selected in the first round of the 2020 NFL Draft; a feat, which before the Toronto-born N'Keal Harry was selected 32nd overall by the New England Patriots in last year’s draft, hadn’t been achieved by a Canadian since 2011, per Canadian football site 3downnation.com, when the Philadelphia Eagles drafted former offensive lineman Danny Watkins from Kelowna, B.C., 23rd overall. Other than Harry and Watkins, only three other Canadians have ever been selected in the first round.

Well-known draft analyst Daniel Jeremiah of NFL Network said in February in advance of the NFL Scouting Combine that he thought it was possible that Gallimore could hear his name called in the first round of the draft, which begins on Thursday, April 23.

"I have him outside the first round," Jeremiah said. "But as I mentioned, he’s going to test incredibly well and that will generate some buzz, and potentially get him in that [first-round] discussion.

Just as Jeremiah predicted, Gallimore did, in fact, test quite well at the combine, the NFL’s premier draft skills testing showcase. In the 40-yard dash, the six-foot-two, 304-pound defensive tackle posted a blazing fast time of 4.79 seconds. Per the Toronto Sun's John Kyrk, Gallimore’s 4.79 seconds was the third fastest 40 posted by any 300-pound combine participant at any position over the past 21 years, and only the third sub-4.8 40 for an interior defensive linemen of any weight since 2006.

While he lit it up in the sprint portion of the combine, Gallimore did not fare nearly as well with some of the other tests. His 20-yard shuttle time of 5.01 seconds ranked 25th of the 26 defensive linemen who participated in that drill, per Kryk. His 23 reps of 225 pounds in the bench press ranked 23rd, and his 7.23-second time in the three-cone drill tied for 23rd.

Local NFL Prospect Neville Gallimore on his diet regiment, his 40 yard dash time, draft process, keys to the defensive tackle position, playing minor football in Ottawa, leaving home for prep school, his love for the Sens and time with the Oklahoma Sooners.

Although he says overall it doesn’t matter to him in what round he gets drafted, Gallimore admits that he thinks being picked in the first round would be a special experience for him.

"I couldn’t even tell you how that would feel if I was to get drafted in the first round," Gallimore told TSN Radio 1200 Ottawa in March following his performance at the combine. "That would be the biggest deal, not only for me, but obviously for my family, and even for the city at large. I feel like it’s been a very long time that Ottawa’s really got the recognition it deserves for the type of athletes or players it’s producing. I feel like I have an opportunity to change that narrative."

Gallimore, who played four seasons with Oklahoma and started every game during his final two seasons, had a strong campaign with the Sooners in 2019. Alongside his 30 tackles, the defensive tackle registered careers highs in tackles for loss (7.5), sacks (4.0) and matched his career-best for forced fumbles (2). His performance resulted in the Ottawa native being selected as part of the Big 12 conference’s second team.

Gallimore’s move to St. Catharines paid dividends, as he become a consensus four-star U.S. college prospect and earned scholarship offers from 30 NCAA programs, including Oklahoma, Ohio State, and Florida State. His play landed him the honour of being the first Canadian to participate in the U.S. Army All-American Bowl for top high-school prospects, when he did so in 2015.

Gallimore, who redshirted during his first season with Oklahoma in 2015, was teammates with Heisman Trophy-winning quarterbacks Baker Mayfield and Kyler Murray during his time with the Sooners, as well as Jalen Hurts, who is expected to be drafted in the early rounds of this year’s draft.

Besides his NFL prospects, Gallimore has also maintained the top spot on the CFL Scouting Bureau's rankings.