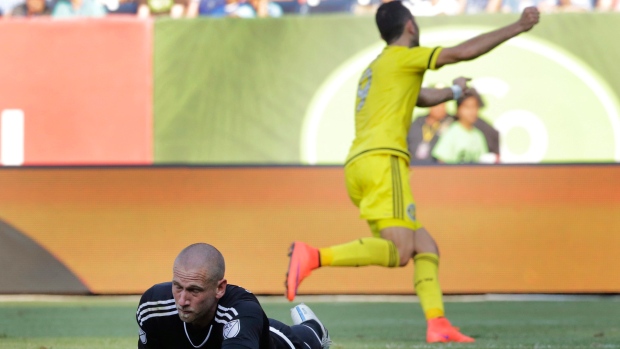 With approval for David Beckham’s proposed downtown Miami stadium, the league expanding to a possible 28 clubs and an upgrade to the targeted allocation money treasure chest hogging the headlines following last Saturday’s Board of Governor’s meeting – almost completely lost was news that Major League Soccer was moving forward with its desire to become the first domestic league in world football to permit video technology.

Quite ironically only 24-hours later if video technology had been available to the officials during MLS Cup, Portland’s second goal would have been ruled out as the ball was clearly seen to be a couple of feet over the touchline during the buildup play. Plus if the Crew’s Michael Parkhurst was adjudged to have handled the ball on during a second half goal-mouth incident Portland would have been awarded a penalty. For his part Parkhurst would likely have been sent off as well.

The Dutch FA are also very keen to introduce video technology and are so convinced that it will be permitted at some point in the future they have already started training their referees. Early this year though they were unsuccessful in their lobbying of FIFA to allow them to use it during their domestic cup competition.

Video technology is an issue which polarizes opinion like nothing else in football. The skeptics claiming, like goal line technology, it will take away from the purity of the game and football's well established free flowing nature as play is halted temporarily to analyze disputed incidents.

The perception these days is that disputed incidents occur in every game, just like with Portland’s second goal in MLS Cup, where the officials do not always see them nor make the correct call. In most recent seasons especially, the voices of those who support the introduction of video technology into the beautiful game have become increasingly louder.

So often, and as there are so few goals in football - say in comparison to ice hockey - poor decisions have a direct impact on the outcome. No one can say for sure that if Frank Lampard’s now infamous ‘goal’ would have correctly counted for England in that round of 16 match against Germany at South Africa 2010, then come the final whistle could it have been the Germans who went home?

The IFAB has been in existence since 1886 and are comprised of one member from each of the so termed four home nations of England, Scotland, Wales and Northern Ireland. Only at their AGM’s can revisions be made to the Laws of the Game.

Goal line technology made its domestic league debut in the Barclays Premier League for the 2013/14 season, was also installed for Brazil 2014 and this summer’s Women’s World Cup Finals. This season Ligue 1, the Bundesliga and Serie A came on board.

MLS had very much expected to be one of the pioneering domestic leagues to use goal line technology but it was announced back in early spring 2013 the league would not implement it owing to prohibitive installation costs. It was reported at the time the costs for each club was in excess of $250,000. Added to that cost there would be a charge of approximately $4,000 for each game goal line technology was deployed.

Goal line technology is certainly more expensive than the route favoured and taken by UEFA, the European governing body opting in favour of placing additional officials by the goals. They are in position to monitor if the ball goes over the goal line. Plus they assist the referee for incidents which occur in the penalty area. An example of this was illustrated in the Chelsea v Porto Champions League game in midweek, where the goal line official correctly awarded Chelsea their opening goal.

One significant added benefit of having video technology in football is it would most certainly cut down on the often grotesque abuse of officials, referees especially.

This ugly side of the beautiful game has increased quite dramatically in recent times. A BBC report earlier this month stated that two-thirds of referees disclosed they experienced verbal abuse on a regular basis. This shocking disclosure formed a significant part of the conclusions of a comprehensive survey of more than 2,000 referees who mainly officiated at matches in grass roots level soccer across England.

As much as Sunday morning players like to mimic their favourite players out on the pitch, they like everyone else at the stadium or watching live broadcasts observe players - often in clusters - surround and be abusive towards referees when decisions go against them. In turn those players who turn out for the likes of their local pub team mirror this behaviour.

Increasing abuse of referees was a subject very much on the lips of commissioner Don Garber at MLS Cup and the league intends to clamp down hard on the offenders. That's something the league should do to all players who intentionally and in very deliberate ways con the officials, and by extension the paying public, into awarding penalties and free kicks.

Like all things in life there are elements of risk and reward to all actions and decisions. Clearly players feel the risk of a yellow card as the price for the possible reward on offer of a game-winning penalty is not preventing them going to ground with the imagination and creativity one usually associates with Super Bowl commercials.

Aware their every false move would be captured on video and certainly used as a substantial piece of evidence to convict them of football fraud would only lead to players rediscovering the inherent benefits that good old fashioned honesty is indeed the best policy.

For their part MLS let it be known in the fall of their intentions to live test video technology during friendlies and academy matches. The league would focus on just three key areas of play - the awarding of goals, penalties and red cards.

To all intents and purposes video technology is already in play, albeit away from pitch. The BPL make best use of it when retroactively punishing players after the fact. This occurring only when the officials fail to spot an incident and discipline the offender during the game.

Earlier in the week Manchester United’s Bastian Schweinsteiger was suspended for three matches for such an incident which occurred at Old Trafford last Saturday. Schweinsteiger was clearly seen to elbow an opponent but the incident went undetected by the match officials at the time. Elbowing an opponent is a certified red card offence that automatically carries a three-match ban.

Video technology deployed in matches would change the face of football like nothing else ever gone before. One with by the mere flicking of a switch would remove that cauldron-like passionate debate which monopolizes the post-game conversations from the stadiums to the pubs - just as it did following Lampard’s infamous non-goal at South Africa 2010.

You can be assured though the IFAB and FIFA will not be rushed into any decisions. However with the recent formation of an alliance involving some of the biggest domestic leagues in world football, of which MLS is one, and an alliance Don Garber alluded to in his annual state of the league address on the eve of MLS Cup - perhaps it will take a lone rogue league veering away from the corporate FIFA line and introduce video technology autonomously.

Noel Butler can be reached at: