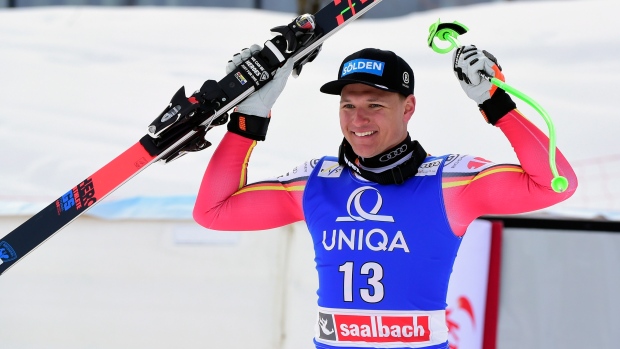 The German speed specialist nearly skied out halfway through his run but recovered and edged then-leader Beat Feuz by two hundredths of a second.

“I couldn’t believe it at the finish, but I am happy of course,” Dressen said.

Feuz was followed by three Swiss teammates; Mauro Caviezel was 0.09 seconds behind in third and Carlo Janka and Niels Hintermann placed fourth and fifth, respectively.

Feuz would have locked up the season downhill title for the third straight year if he won the race.

He is still a strong favourite for the globe, leading second-placed Dressen by 194 points with two events remaining. A race win is worth 100 points.

“Beat will be able to score seven points from the last two races,” Dressen said. “We can already congratulate him on a deserved title.”

Dressen caught a bump after landing a jump and only just managed to keep his balance. He was 0.74 seconds off the lead at the next split but made up enough time in a flawless bottom section.

“After that mistake I thought that I had lost control of my ski, I didn’t stand straight on it,” Dressen said. “I was relatively wide of the course and just thought, ‘The race starts here again.'”

The German’s third win of the season and fifth overall came 12 days after he triumphed in his home race in Garmisch-Partenkirchen.

A super-G on the same hill is scheduled for Friday.

The races in the Austrian Alps replaced the Olympic test events scheduled for Yanqing this weekend, but moved from China following the outbreak of the coronavirus.

Saalbach-Hinterglemm is one of the three host venues for the 2025 alpine skiing world championships after an unsuccessful bid for the 2023 edition, which has been awarded to Courchevel and Meribel in France.