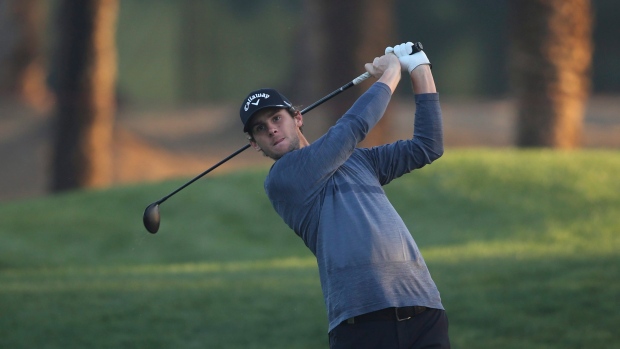 VYSOKY UJEZD, Czech Republic — Thomas Pieters birdied the final hole to take a one-shot lead into the final round of the Czech Masters on Saturday.

Two shots off the lead after the second round, the Belgian golfer had a strong start on the front nine. He recovered from a bogey on the third hole with four straight birdies and added an eagle on the par-5 9th to top the leaderboard.

But the 2015 Czech Masters champion opened the back nine with another bogey and had to wait until the birdie on the 18th to regain the lead and close at 6-under-par 66 for a 16-under 200 total at the Albatross Golf Resort near Prague.

"The key to that front nine was the driving," Pieters said. "I hit it really far and straight so that was presenting a lot of birdie opportunities and a lot of short clubs into the holes.

"To convert the putt on nine after a wonderful six iron in was great, and it's the closest I've come to a two on a par five."

Adria Arnaus of Spain surged on the leaderboard with a bogey-free round of 7-under 65 with seven birdies that gave second place to himself at 15 under.

Overnight leader Edoardo Molinari of Italy dropped his first shot at the Czech Masters on the 14th to finish at 2-under 70 and share third with Swedes Rikard Karlberg (66) and Robert Karlsson (67), Chile's Hugo Leon (67). They were two strokes behind Pieters.

Defending champion Andrea Pavan of Italy carded a 71 to be tied for 17th at 9 under.

Three-time major champion Padraig Harrington was on 2 under overall after a 73.