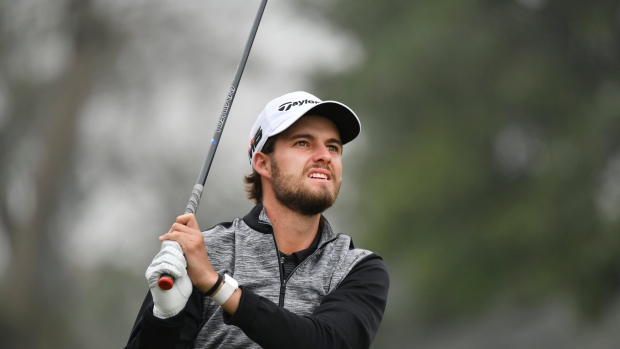 HOWEY-IN-THE-HILLS, Florida—It looked like it was going to be a three-way tie for first after the first round of the Mackenzie Tour – PGA TOUR Canada Qualifying Tournament on Tuesday. Then amateur Zack Taylor, playing in the final grouping of the day, turned in his score with darkness setting in.

Make it a quartet of leaders as Taylor joined Luis Gagne, Isidro Benitez and Cristian DiMarco atop the leaderboard, all at 5-under. They lead another amateur, Christopher Williard, by a shot, with five players tied at 3-under and two back.

Gagne was the first to post his 67 on the par-72 El Campeon Course, with the other two pros playing in ideal conditions. A storm that passed over the area in the afternoon forced Taylor to play four of his holes in a steady rain. It didn’t seem to matter to the Pittsburgh native, who is currently a senior at Coastal Carolina in Conway, South Carolina. He made three birdies during the storm that lasted a little over an hour.

“I putted well today. I made a lot of good putts,” said Taylor. “At the start, I made some par putts to keep things going, and toward the middle of the round I hit the ball pretty close and pretty solid, so I had a lot of birdie putts. I made a good bit of what I had.”

Taylor made it to 6-under through 15 holes before a bogey-birdie-bogey-par finish dropped him back a shot.

Gagne, a native of Costa Rica who moved with his family to Florida when he was four, played his front nine in 3-under then was bogey-free over his final nine holes, with three of his six birdies coming on the El Campeon Course’s four par-5s—all on the back nine, at Nos. 10, 14 and 17.

“The course was playing pretty difficult. I did a really good job managing my game. Whenever I did get in trouble, I found a way to get myself back in play with a par putt, and I made most of those par putts,” said the graduate of Orlando Christian Prep, located about an hour from here. “I hit some bad shots but was able to give myself some par putts, and I took advantage of the easy holes out here, which there aren’t many.”

Both DiMarco and Benitez spoke of different routes to get to their 67s. DiMarco said he picked and chose his spots when to be aggressive. “I kept it simple. I took my chances when I could, and when it wasn’t an ‘aggressive’ hole, I played it to the fat of the green.” DiMarco finished his round in style. Sitting at 1-under through 13 holes, the former University of South Florida collegian made four consecutive birdies followed by an 18th-hole par. Benitez had a similarly strong back nine. After struggling with his green reading early on, something clicked with his putting.

“Reading the greens was a problem today, but hopefully tomorrow I can do what I did on my second nine and make a lot of birdies again,” said the PGA TOUR Latinoamérica veteran. “On the second nine I putted really well.”