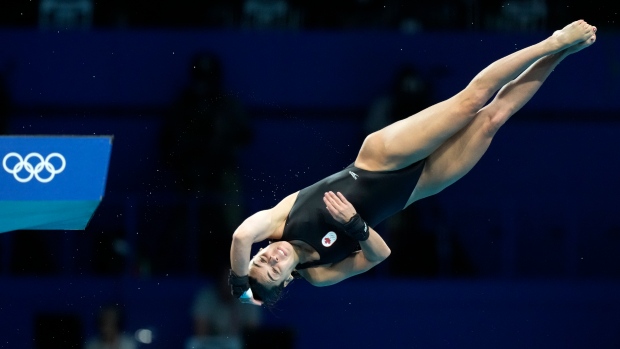 MONTREAL — Canadian diver Meaghan Benfeito, a three-time Olympic medallist, has announced her retirement from the sport.

The 33-year-old from Montreal teamed with Roseline Filion to win bronze in the 10-metre synchro event at the 2012 London Olympics and the 2016 Rio de Janeiro Games.

“After several months of reflection, it is now time for me to hang up my Speedo," Benfeito said in a statement. "I'm so proud of the career I've had and extremely grateful for what diving has brought to my life, but I'm finally ready to move on to the next chapter."

She was Canada's flag-bearer at the Commonwealth Games in Gold Coast, Australia, where she won two silver medals.

Benfeito competed in four Olympics, making her debut at the 2008 Games in Beijing. She just missed out on a medal at last year's Tokyo Games, finishing fourth with partner Caeli McKay in the 10-metre synchro.

On Wednesday, Benfeito decided to officially announce her retirement, something that has been unofficial to her for a few months.

“I haven’t resumed training since the Games. I haven't set foot in Olympic Stadium since before Tokyo," Benfeito said. "(After the Olympics), I went to join my boyfriend (Alexandre Dupuis) ​​in Regina, where he played for the Roughriders, and I rubbed shoulders with the national team at that time. I was on the edge of a swimming pool four days a week for three months, and I didn’t miss it. I like the athletes, the coaches and the staff, but miss diving? No. I did what I had to do."

Benfeito lost her Olympic medals when a fire destroyed her Montreal-area condo building on Jan. 28, 2021. She was presented with replacement medals shortly before the start of the Tokyo Games.

Benfeito has she wants to stay involved in diving, which she has been doing since age seven. She also said she has started working with children and wants to open up her own daycare with her sisters.

This report by The Canadian Press was first published April 6, 2022.