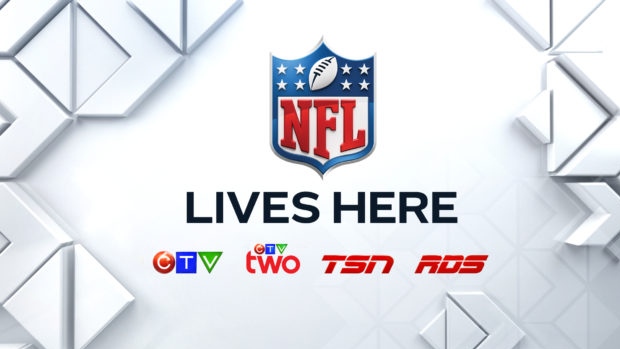 The expanded agreement also includes the NFL’s THURSDAY NIGHT FOOTBALL package, which will air on TSN and CTV Two for the first time, and return to RDS, beginning with the 2017 season. With the addition of THURSDAY NIGHT FOOTBALL, TSN and RDS further strengthen their NFL programming, with primetime content three nights a week from the powerful NFL brand.

“The NFL continues to deliver strong audiences in all broadcast windows, and we are proud to expand our longstanding partnership to make Bell Media the exclusive broadcast home of NFL action in Canada,” said Stewart Johnston, President, Bell Media Studios and TSN. “With this new agreement, TSN and RDS will air three nights of primetime content weekly from the biggest sports property in North America. The NFL is a respected brand to both fans and advertisers alike, and we’re excited to deliver an even bigger NFL schedule across our platforms, and with the expanded digital rights and expanded footage and highlight rights, showcase the NFL like never before.”

“We are excited to continue our partnership with Bell Media in Canada to bring our Canadian fans NFL coverage through Bell Media’s broad portfolio of channels,” said Mark Waller, NFL Executive Vice President of International & Events. “Through this expanded agreement, NFL fans will now be able to view NFL action across all NFL broadcast Windows conveniently within Bell Media’s family of channels.”

As part of Bell Media’s commitment to the NFL, and as the home of football on television in Canada, TSN continues to be Canada’s source for NFL news and information, led by SPORTSCENTRE. TSN.ca will also feature increased fantasy content, while the network delivers a comprehensive slate of NFL programming from ESPN, including NFL COUNTDOWN, NFL LIVE, NFL PRIMETIME, MONDAY NIGHT COUNTDOWN, and the NFL DRAFT. Additionally, TSN broadcasts the Sunday night pre-game show FOOTBALL NIGHT IN AMERICA.

TSN has been televising NFL games since 1987, and CTV’s partnership with the NFL began in 2007.