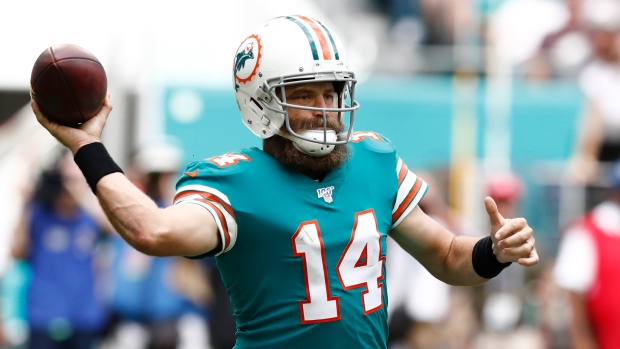 Week 2 was a horrific week for injuries in the NFL and we lost a number of superstar players for extended amounts of time.

That being said, the Miami Dolphins and the Jacksonville Jaguars were able to avoid major injuries and both teams are set to take the field at full strength tonight.

So let’s get right into Week 3.

Time for a win?

The Miami Dolphins have had a tough draw to start the 2020 season.

And for the third consecutive week, Vegas has sided with the Dolphins opponent as they are three-point underdogs to the Jaguars.

But the Dolphins have looked better than their winless record would suggest. With just 10 minutes remaining in their matchup with the Bills, the Dolphins found the endzone and took a 20-17 lead.

Although they were unable to hold onto the lead, Miami scored a touchdown with just 49 seconds left in the game to cover the six points, falling 31-28.

Quarterback Ryan Fitzpatrick struggled in the opening game of the season, but rebounded nicely against Buffalo, tossing for 328 yards and two touchdowns.

He enters this Thursday Night matchup against the Jags with over/under props of 266.5 yards, 1.5 touchdowns and 36.5 passing attempts.

One of the reasons that Fitzpatrick was successful in Week 2 was his connection with tight end Mike Gesicki.

Gesicki posted a career-high 130 receiving yards with eight catches and a touchdown.

He enters Thursday night with an over/under of 45.5 yards and is +210 to find the endzone.

This Dolphins team needs to take advantage of this weak spot on their schedule.

Miami will host the Seattle Seahawks in Week 4 and travel to San Francisco to take on the 49ers the following week.

If they don’t pick up a win against Jacksonville, this record could get really ugly, fast.

Gardner Minshew is on fire.

The 24-year-old became a household name in 2019 thanks to the combination of his gunslinger mentality and his A+ facial hair.

It’s been just two games, but the quarterback hasn’t let his fans down.

Minshew sits tied for second with six touchdowns, fourth with his 75.4 per cent completion percentage, and his QB rating of 115.7 is seventh in the league.

He enters the game with over/under props of 263.5 passing yards, 1.5 touchdowns and 21.5 completions.

The Jacksonville quarterback has completed 24.5 passes per game this season.

At the start of the season, we were all wondering who would make plays on this team.

Cole entered the NFL in 2017 with the Jags, posting 748 receiving yards and three touchdowns. But he’s struggled since and failed to surpass 500 yards in each of the last two seasons.

This year, after just two games, the 27-year-old has 105 yards and two touchdowns.

Cole also leads the team with 12 targets and 11 receptions.

The wideout has an over/under of 46.5 yards and 3.5 receptions this week.

Let’s be honest, the Jags are going to trail in a lot of games and if Minshew is going to keep posting big numbers, he won’t be throwing to just DJ Chark.

Cole is currently owned in just 15.1 per cent of all ESPN leagues, so he might be worth a roster spot in some deeper leagues.

The Jags enter as a three-point favourite in a game that really could go either way.

Jacksonville has been good this year and is 2-0 against the spread, the Dolphins are 1-1.

Jacksonville went 1-1 last season ATS as a home favourite, while Miami was an underdog on the road for every game in 2019 and went 5-3 ATS.

One number we also need to look at is the total.

The Dolphins and Jaguars are a combined 4-0 this season hitting the over and Vegas expects this to be one of the higher scoring games of the week.

The 48.5 total is lower than just five other games on the schedule for this week.

The way I look at it is this: You have two quarterbacks who should throw the ball a lot. And I mean a lot.

With high volume in the passing game, turnovers enter the equation.

Fitzpatrick is averaging 1.5 INT’s per game this year and despite starting just 13 games last season, he was in the top-10 for interceptions and interception percentage.

Minshew, after not throwing an interception in Week 1, had two last week.