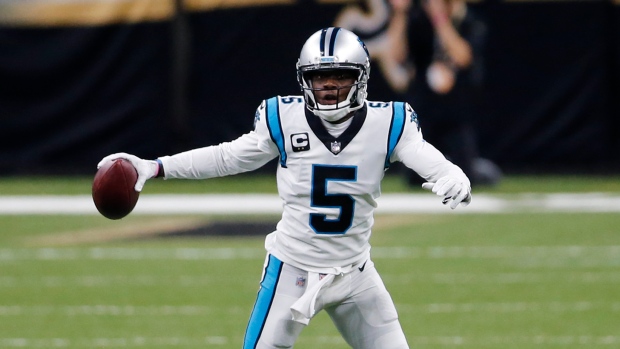 Week 8 of the NFL season has arrived and we have an NFC South showdown to kick things off.

Teddy Bridgewater and his Carolina Panthers look to put an end to a two-game losing skid as they take on Matt Ryan and an Atlanta Falcons team that just keeps finding new ways to lose.

If we’ve learned one thing about this NFL season, it’s that weird things are going to happen.

Just last week we saw the Falcons lose a game because of an unwanted touchdown by their own running back, and watched Daniel Jones trip over his own two feet preventing what would’ve been an 88-yard touchdown run.

I can’t wait to see what Week 8 has in store.

Let’s get started. Let’s get weird.

Better than it looks

After seven games the Carolina Panthers sit with a 3-4 record, third in their division and out of a wildcard spot.

But the Panthers have looked better than their record indicates.

The team was dealt a massive blow in Week 2 when stud running back Christian McCaffrey went down with a high-ankle sprain.

But in his absence, Carolina has stayed afloat, going 3-2 with wins over the Falcons, Arizona Cardinals and Los Angeles Chargers.

The two losses without McCaffrey – and their Week 1 loss to the Las Vegas Raiders – came in a one-possession game.

When McCaffrey went down, it was Mike Davis who got the call.

After five starts and 70 carries, the 27-year-old is averaging 4.04 yards per attempt, a number that tops McCaffrey’s 3.8 yards per attempt through his first 41 rushing attempts of the season.

Davis has been productive in the passing game as well, hauling in 29 of 33 targets for 159 yards and two scores.

The guy handing off the ball and connecting with Davis through the air has been quarterback Teddy Bridgewater.

Bridgewater appears to be better than he’s ever been before, and has a career-high competition percentage of 72.2 per cent and is on pace to shatter his career highs in passing yards and touchdowns.

Just a few weeks ago, Bridgewater threw for 313 yards and two touchdowns against this very Falcons defence.

I expect him to have a big night once again.

THIS CAN’T BE POSSIBLE

Seven weeks into the season and the Falcons have been one of the biggest disappointments in the league.

The loss to Detroit was just another chapter in a book of the biggest head-scratching losses we’ve ever seen from one organization.

In Week 2 against the Dallas Cowboys, the Falcons blew a 20-point lead in the fourth quarter. And the very next week, Atlanta held a 16-point lead late in the game only to collapse against the Chicago Bears at home.

Things started to look on the up-and-up for the Falcons following their Week 6 win over Minnesota.

But they seemingly hit rock bottom last week when Todd Gurley tried to give himself up at the one-yard line late in the fourth quarter to set up the game-winning field goal, but instead fell into the end zone, setting up a Matthew Stafford game-winning drive the other way.

It was the kind of loss that if you saw it in a movie you’d think, “Okay, this is a bit of a stretch.”

A bright spot for Atlanta has been wideout Julio Jones.

After missing two games with an injury and leaving early in Week 4, the superstar appears to be back as he has brought in 16 receptions for 234 yards and two touchdowns in their last two games.

Jones has faced the Panthers 15 times in his career, averaging 92.66 yards per game and has six touchdowns.

Jones enters tonight with an over / under of 70.5 yards, a number he has surpassed seven times against the Panthers, and in six of his last eight regular season games dating back to last season.

The Falcons will need production from their star wideout if they want to get their season back on track.

Carolina enters the game as a less than a field goal favourite at -2.

The Panthers enter the game 4-3 against the spread while the Falcons are just 2-5.

Panthers RB Christian McCaffrey is out for tonight's game against the Falcons. Carolina is a one-point favourite at home. After starting the season 0-2 ATS, the Panthers are 4-1 ATS over their past five games. #RiseUpATL #KeepPounding https://t.co/Wxl45LZLtc

It’s a shame this game is on Thursday night, because it means I can’t use it as my TSN Edge best bet of the week.

I love the Panthers in this spot and Bridgewater is a big reason why.

The 27-year-old has taken on the Falcons three times in his career, twice with the Minnesota Vikings, and once just a few weeks ago.

He is a perfect 3-0 straight up and against the number.

When Bridgewater starts, his team has a very good chance of winning and an even better chance at covering.