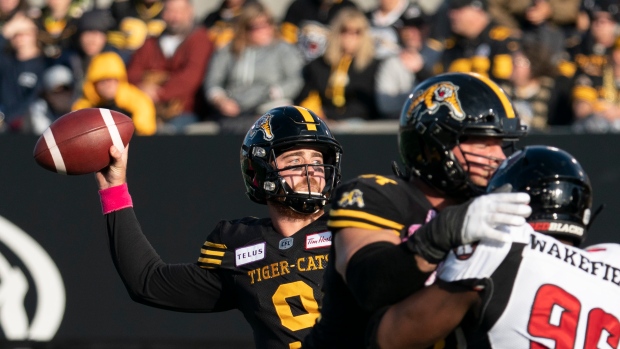 HAMILTON — The wins and accolades are nice but they're not what fuels Brandon Banks.

Banks had seven catches for 116 yards and a TD to lead Hamilton to a record-setting 30-12 win over the Ottawa Redblacks on Saturday. The victory was a fourth straight and club-record 13th this year for the Tiger-Cats (13-3), who came off the bye and have two regular-season contests remaining.

The five-foot-seven, 150-pound Banks now has a career-best 101 catches for 1,349 yards with 10 TDs. He's only the third Ticat to crack the 100-reception plateau — Andy Fantuz and Luke Tasker and the others — and is just three short of Tasker's club record set in 2017.

"It (surpassing 100 receptions) means a lot," Banks said. "But I've said since the start of the season, none of this means anything if I don't have a Grey Cup ring.

"A lot of people know what I can do. I'm pretty much trying to win a Grey Cup, that's all I need to prove to anybody. But it's definitely an honour."

Banks knows the pain of losing a Grey Cup game. His late 90-yard punt return TD was nullified by penalty in Hamilton's 20-16 loss to Calgary in the '14 title contest at B.C. Place Stadium.

Banks and quarterback Dane Evans anchored Hamilton's record-setting performance. Evans hit a streaking Banks on a 62-yard TD strike at 14:26 of the third to put the Ticats head 26-12, thrilling the Tim Hortons Field gathering of 23,692.

That cemented Hamilton's win after a less than stellar first half. However, all Ottawa (3-13) could muster were four Lewis Ward field goals in dropping its ninth straight loss.

"When you have an opportunity to set a franchise record, I think it's important you seize that opportunity and that's not easy," said Hamilton rookie head coach Orlondo Steinauer. "It's easy to talk about and say, 'Well, it's Ottawa coming in.' No, that's not how it works, they come out with a gameplan to beat you.

"I think it means a lot to the city, the organization from the top down . . . but for now, moving forward, it's setting that standard even higher. It's can we get 14? It's a proud moment (but) it's not going to define us. We have have a lot of unfinished business. We all know the ultimate goal but we have game No. 14 to take care of and we'll go from there."

Hamilton also improved to 8-0 at Tim Hortons Field. That's important given the Ticats have clinched first in the East Division and will host the conference final.

And Banks scored a TD for a fifth straight game.

Evans finished 32-of-41 passing for a career-high 452 yards with a TD and interception. He improved to 8-2 since replacing incumbent Jeremiah Masoli (season-ending knee injury).

"What I've learned up here is quarterbacks throw for a lot of yards but it goes all over," Evans said. "You can't do those yards without the O-line and you dang sure can't do it without guys going up and catching the ball.

"Those yards are a byproduct of that, I'm just playing point guard trying to get them the rock. It (13 wins) is pretty special right now but I'll tell you in about a day we're going to be wanting 14."

David Watford's one-yard TD run at 7:33 of the third gave Hamilton a 19-9 advantage. It came after the Ticats successfully challenged a Sherrod Baltimore interception citing pass interference, which was called on Ottawa's Corey Tindal Sr.

Rookie Will Arndt was 17-of-30 passing for 112 yards in his second career start for Ottawa, which suffered its first loss in Hamilton since 2014.

Hajrullahu's 38-yard field goal at 14:49 of the second earned Hamilton a 12-9 half-time advantage. That flattered the Ticats as all Ottawa managed from an interception and blocked punt were two field goals.

Ottawa also had a Leone completion on a fake punt erased by penalty.

"We didn't have a very good first half but to me it looked like we were coming off the bye week," Evans said. "The greatest thing was when the coaches came in, you'd probably expect them to tell us how bad we are.

"But they just said, 'We've got to play like we play. That wasn't our half of football, we didn't play anywhere close to how we do,' and that's all it took. We came out and put on a show in the second half."

Ward's 27-yard boot at 12:30 of the second pulled the Redblacks to within 9-6 following Marco Dubois's recovery of a blocked Hajrullahu punt at the Hamilton 25-yard line. Ward then made it 9-9 with a 56-yard field goal at 13:53, the longest in Ottawa's football history.

Hajrullahu's 33-yard field goal at 2:54 pushed Hamilton's lead to 9-3. It was set up by Jumal Rolle's recovery of an onside kick at the Ticats' 50-yard line.

Ward opened the scoring with a 40-yard field goal at 9:54 of the first set up by De'Chavon Hayes' interception. Marshall put Hamilton ahead 6-3 with a five-yard TD run at 13:14 as the two-point convert was unsuccessful.