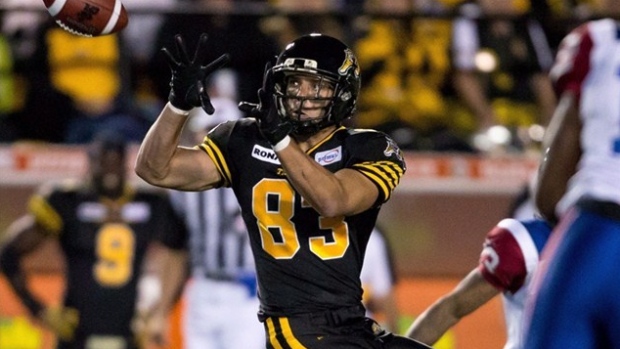 HAMILTON - The Hamilton Tiger-Cats won't have running back C.J. Gable and Canadian slotback Andy Fantuz when they face the Winnipeg Blue Bombers on Sunday night.

The Ticats placed Gable and Fantuz on the six-game injured list Wednesday after both suffered elbow injuries in the club's 34-18 home win over the Toronto Argonauts on Monday night. Hamilton head coach/GM Kent Austin doesn't expect either Gable or Fantuz to miss the remainder of the season but said Gable will likely need longer to return to the lineup than Fantuz.

"I've got to be careful what I say but right now it doesn't look like it's going to be season-ending," Austin told reporters. "One's probably going to be longer than the other but they'll both be able to come back, I think, this year."

Hamilton will face Winnipeg sporting an 8-0 record at Tim Hortons Field since calling the facility home midway through last season.

Gable was limited to just seven games last season due to shoulder and ankle injuries. He missed the first three games of the 2015 campaign with a broken finger suffered during training camp.

The Ticats added running back Ray Holley and wide receiver Giovanni Aprile to the active roster while running back Nic Grigsby and receiver Robin Medeiros were placed on the practice roster.

"Ray has a different skillset than C.J. although we expect him to play well in all three phases," Austin said of Holley. "He's probably more of a dynamic receiver out of the backfield although C.J. is very effective there.

"They have different running styles but we'll build our offence around all the guys, not just our tailback."

Austin was also happy to have Grigsby back in the fold. Grigsby joined the Ticats last season after being released by Winnipeg before being let go by Hamilton on July 14.

"He played well for us last year," Austin said. "He knows the offence and I knew he was in shape and would come back in ready to play.

"I've said since he got here that Nick was a good teammate and did everything that we asked him to do."

Fantuz, 31, has been a favourite target this season for Ticats quarterback Zach Collaros. The six-foot-four, 220-pound native of Chatham, Ont., in his fourth season with Hamilton, has 30 catches for 311 yards.