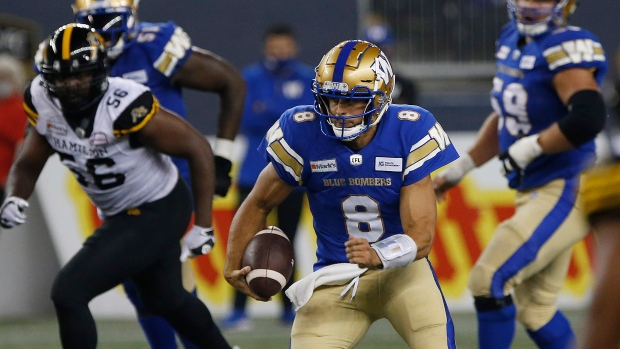 This Grey Cup Week will undoubtedly be a celebration of all-things Tiger-Cats, especially since the cast of out-of-towners from across the country won’t be anywhere near as big as it is in non-pandemic times.

With the home team in the championship game that Hamilton has waited a quarter century to host, the black and gold is sure to drown out the blue and gold around town.

But in pure football terms, this Grey Cup game is all about the Winnipeg Blue Bombers, the best and most consistent CFL team we’ve seen in a very long time. These may not be the Swaggerville Blue Bombers of a decade ago, but they should have plenty of confidence as they roll into Steeltown as prohibitive favourites.

The Blue Bombers beat Hamilton 33-12 in the 107th Grey Cup game in November of 2019, then opened this season at home with a 19-6 win over the Tiger-Cats that set the tone for their year. They’ve never really looked back, with an early loss at Toronto the only blemish on an otherwise perfect season when it comes to games that mattered.

The Bombers come to the Grey Cup on a 15-1 run in such contests, dating back to the final week of the regular season in 2019.

Just like in 2019, the backbone of this team is its defence. These Bombers are statistically one of the best defensive teams we’ve ever seen, allowing just six points during all fourth quarters through the first 12 weeks of the pandemic-shortened 2021 regular season.

In ends Willie Jefferson and Jackson Jeffcoat, along with middle linebacker Adam Bighill, the Bombers have three of the league’s biggest stars on defence, surrounded by a talented supporting cast of playmakers.

On offence, the Bombers led the league in scoring, despite the fact there wasn’t always a need to score during the second halves of their games this season.

Quarterback Zach Collaros is expected to be named the league’s Most Outstanding Player on Friday night, an unlikely distinction for a player whose career once seemed in jeopardy because he couldn’t stay healthy. The trade Winnipeg made to acquire him from the Argos for a conditional draft pick in October 2019 has paid off far beyond what anyone could have imagined.

And while Andrew Harris may not be the full-season force he once was at age 34, he proved during the Western Final that for one game there still may not be a better running back in the league.

Good drafting and development, a key trade for a quarterback and three of the most significant free-agent signings for any team in Jefferson, Bighill and Harris is the short version of how this team was built.

The fact that the Bombers managed to win despite turning the ball over six times in the Western Final against Saskatchewan is simply a measure of how dominant they were the rest of the game.

If there’s a weakness on this team, it’s hard to find. It’s certainly not on the sideline, where Mike O’Shea is now the league’s longest-tenured head coach and is trying to become the first to lead his team to back-to-back Grey Cup wins since Mark Trestman did it with Montreal in 2009 and 2010.

If the Bombers win on Sunday, there will be a debate about where this team belongs in the pantheon of great CFL teams.

It can certainly be argued that the consistency and dominance of this team sits up there with almost any. The argument will come over the degree of competition they’ve faced this season.

It’s widely recognized that the 2021 season has not been the best calibre of CFL football for a myriad or reasons, most of which have to do with the pandemic, the year off, and the enormous degree of turnover across the league from the 2019 season.

The Bombers took advantage of a high degree of consistency on their roster to hit the ground running this season, while the league’s other eight teams spent most of 2021 trying to figure things out.

That includes the team standing in the way of a Winnipeg coronation, the one that started 0-2 and had to go on the road last weekend to earn its way to a home-field Grey Cup.

The Tiger-Cats have the CFL’s longest Grey Cup drought, a distinction bestowed upon them when the Bombers snapped their own 29-year streak against them.

It’s easy to forget how shocking that loss was at the time, given that Hamilton was coming off a 15-3 season – the most regular-season wins in franchise history.

The Tiger-Cats have lived-through one Grey Cup upset.

They’d love to experience another.