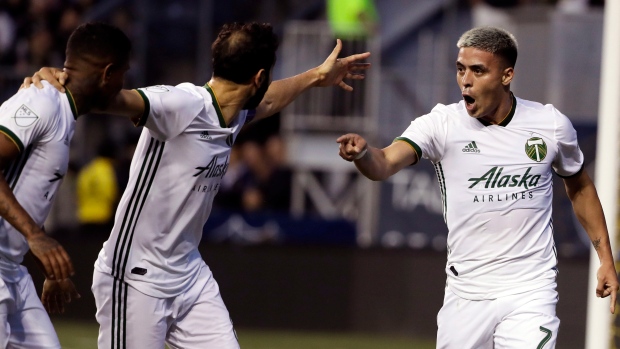 CHESTER, Pa. — Brian Fernández scored twice and the Portland Timbers beat Philadelphia 3-1 on Saturday night to knock the Union from the top spot in the Eastern Conference standings.

Fernández gave the Timbers a 2-0 lead with goals in the 31st and 36th minutes. Fernández opened the scoring with a header to finish Andy Polo's pinpoint cross, then finished a counterattack highlighted by unselfish passes late in the charge by Diego Valeri and Diego Chara. Fernández has three goals in his first two games after signing as a Designated Player on May 6 for Portland (4-6-2).

Kacper Przybylkos slotted home an awkward finish in the 47th minute for the Union (7-4-3) that bounced off the post and curved over the goal line with the ball's heavy spin. Valeri capped the scoring for Portland in the 87th minute with a low hard shot from long distance.