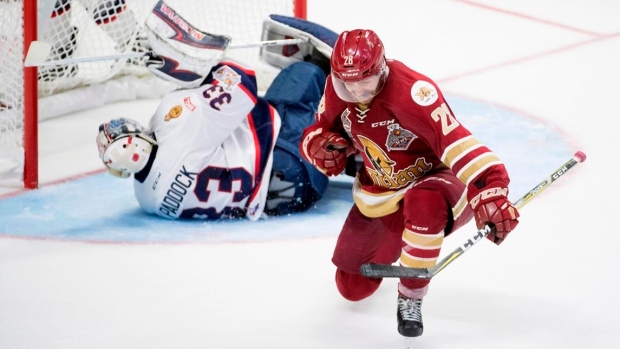 REGINA — During the Acadie-Bathurst Titan's first meeting of the year, head coach Mario Pouliot told his team that winning the Quebec Major Junior Hockey League wasn't going to be enough.

The Titan made sure that was the case Sunday night by shutting out the host Regina Pats 3-0 to win their first Memorial Cup in franchise history.

"So now it's enough," Pouliot said after the victory. "Our goal at the start of the season was to win the last game we want to play and now that it's done, we are happy and we just have to enjoy."

Evan Fitzpatrick stopped 28 shots for the Titan, who became the first QMJHL team to capture the Canadian major junior championship since 2013.

Fitzpatrick said that winning the 100th edition of the tournament is all that matters.

"When you look back on it, nobody's really going to realize it was a 3-0 win," he said. "It's that the Titan won the Memorial Cup."

Adam Holwell, Samuel Asselin and Ethan Crossman, into an empty net, scored for the Titan. Acadie-Bathurst captain Jeffrey Truchon-Viel made a nice move on Regina defenceman Cale Fleury in order to make the pass to Asselin for the insurance goal at 13:02 of the third.

Truchon-Viel brought veterans Olivier Galipeau and Holwell over to receive the trophy with him.

"I wanted to make sure that they lifted the cup first and I remember that last game forever," Truchon-Viel said.

The Titan heavily outshot Regina for the first two periods and the Pats were kept in the game by goaltender Max Paddock, who turned away 41-of-43 shots.

Regina captain Sam Steel, who led the tournament with 13 points and earned MVP honours, said that Paddock was unbelievable.

"Probably shouldn't have been as close as it was for a bit there but he was keeping us in it," Steel said.

The Pats, who also lost to Acadie-Bathurst in the round robin, were vying for their fifth Memorial Cup in franchise history.

Head coach John Paddock said the Titan were the faster team and always had the puck.

"We needed a second puck on the ice because for two periods they didn't let us have it," he said.

Fitzpatrick faced increased pressure in the third as the Pats pressed but he wasn't fazed. Steel almost tied it midway through the period after a juicy rebound, but the goaltender pushed across to stop him.

Holwell opened the scoring at 16:10 of the first when his wrist shot from the left face-off circle sneaked through Paddock's five-hole.

The Brandt Centre crowd started to chant "Go Pats Go" to try and get their team in the game. The crowd gave a big jeer when Regina recorded its first shot of the second period — and sixth of the game — 11 minutes into the second.

The Titan moved to Bathurst, N.B., in 1998 and are one of the smallest markets in the Canadian Hockey League.

The team, which was making its second appearance at the Memorial Cup and first since their first year in Bathurst, has consistently ranked amongst the lowest in league attendance.

The low draws, talk of possible relocation and poor on-ice results led to the Titan being sold by Leo-Guy Morrissette in 2013.

Acadie-Bathurst defenceman Noah Dobson said that it was nice to reward the community with the championship.

"They had 20 hard years there waiting for a chance to win this," Dobson said.

"We won the President Cup at home. To go home with a Memorial Cup, I can't wait to see that."

Notes: The 2005 London Knights, who won the Memorial Cup that season, were named the Canadian Hockey League's team of the century in the second intermission.