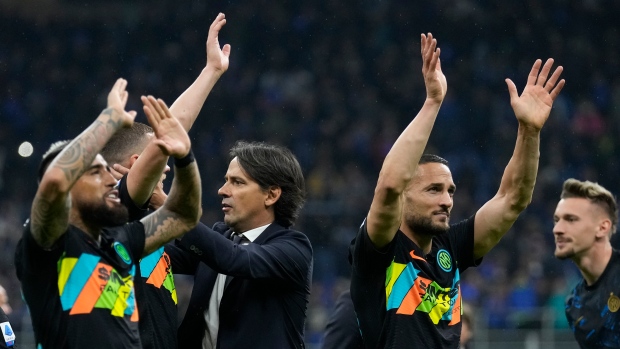 Martinez scored twice to help the defending champion recover from two goals down to beat Empoli 4-2 and move to the top of Serie A on Friday — for 48 hours at least.

Inter was a point above city rival AC Milan, which plays at Hellas Verona on Sunday. There are two rounds remaining after this weekend.

“We got carried away with our desire to score straight away,” Inter coach Simone Inzaghi said. "We should have been more organized without the ball and, unfortunately, we paid a heavy price for two lapses in concentration, but we did really well after that.

"We took 37 shots, which I think must be a record. It was a real test of character. Now we need to regain our strength and energy because another huge game awaits us on Wednesday.”

Inter knew it was the start of a week that could make or break its season. It next has the Italian Cup final on Wednesday against Juventus, which surprisingly lost at relegation-threatened Genoa 2-1 after two very late goals from the home team.

Inter started poorly when Empoli took the lead less than five minutes in. Szymon Żurkowski raced down the right and crossed for Andrea Pinamonti — who is on loan from Inter and a Nerazzurri fan — to slide in and slot into the far bottom corner.

Pinamonti, who didn't celebrate, almost set up a second five minutes later. However, he was offside in the buildup before his cross for Żurkowski, and the goal was ruled out.

Inter was awarded a penalty in the 22nd for a challenge by Fabiano Parisi on Nicolò Barella but it was revoked by referee Gianluca Manganiello after a video review.

Empoli got the second shortly after when Kristjan Asllani got between two Inter defenders to control a long ball and fired an angled shot past the onrushing Samir Handanović to stun San Siro into silence.

Inter pulled one back five minutes from the break after Empoli defender Simone Romagnoli attempted to intercept a cross but turned it into his own net.

The home side levelled on the stroke of halftime. Barella won the ball off Asllani and threaded it through to Hakan Çalhanoğlu, who cut it back for Martínez to drill it into the back of the net.

Inter laid siege to the Empoli goal but it was kept at bay by fine saves from Guglielmo Vicario. However, he could do nothing to keep out Martínez’s volley in the 64th.

The Argentina international whipped off his shirt in celebration and he was joined by almost all of his teammates as the home supporters roared his name in ecstasy. It was his 19th league goal and 23rd in all competitions.

This time there were tears of joy for Domenico Criscito after a stoppage-time penalty.

Criscito missed a spot kick at the end of Genoa's 1-0 derby loss to Sampdoria last weekend but he had the nerve to step up again and drove home the winner against Juve with the last kick of the match.

Genoa's equalizer was shortly after Juventus had a penalty revoked after the referee reviewed Guðmundsson’s challenge on Marley Aké.

Genoa moved level on points with Cagliari and one point below 17th-placed Salernitana. Those two face each other on Sunday.