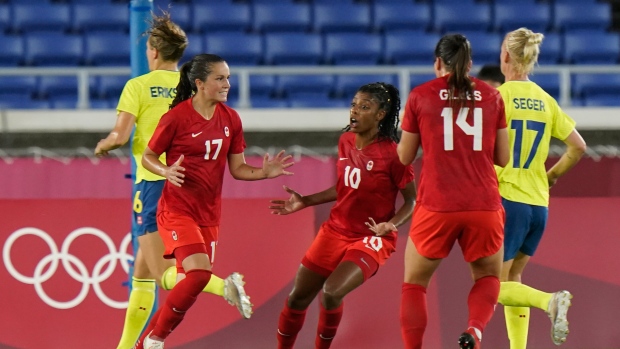 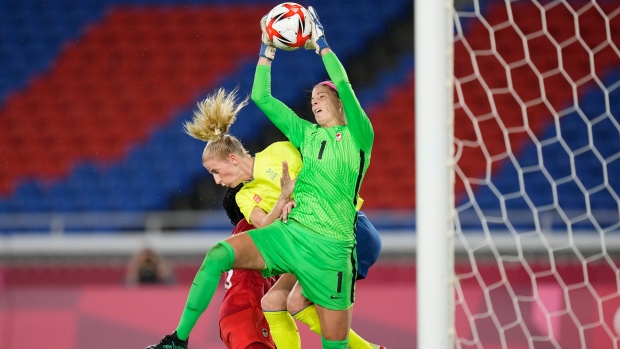 Stephane Labbe makes a save vs. Sweden , The Canadian Press 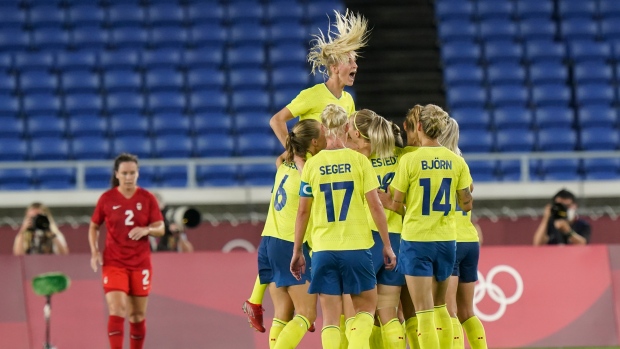 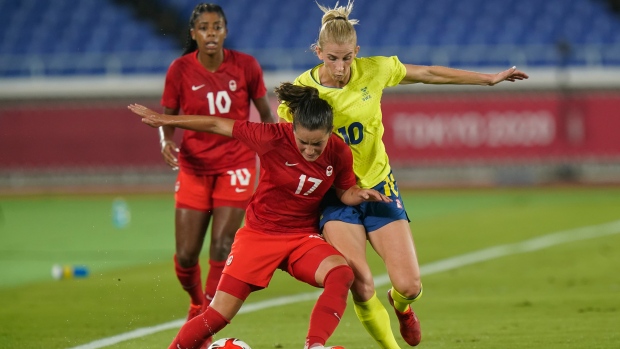 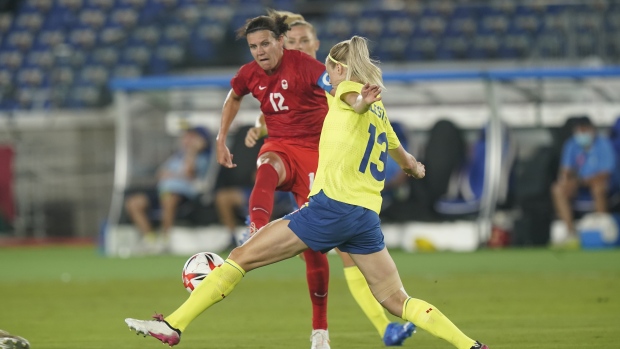 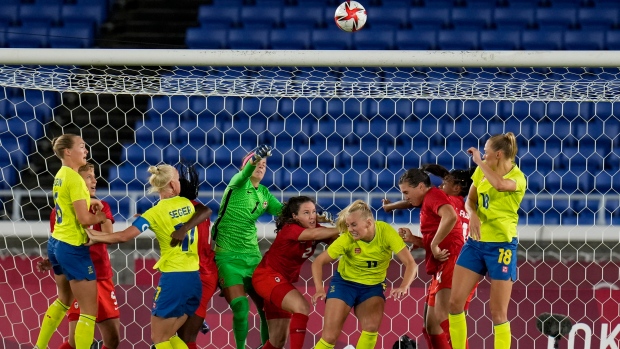 Canada has won their first ever Olympic gold in women's soccer defeating Sweden 1-1 (3-2) on Friday morning. Keep up to date with all the key moments with TSN.ca's Live Blog.

You can also listen to the game LIVE on TSN Radio.

Sweden won the coin toss and will kick first.

The gold medal game will be decided by penalty kicks at Tokyo 2020.

Sweden's Emma Kullberg is substituted on with penalties perhaps in mind.

Lina Hurtig gets a free header inside Canada's penalty area, but can't find the target as Sweden continues to challenge.

A cross from inside the box is punched up by Labbe and leads to two more chance for Sweden, but somehow stays out.

Yet another Swedish corner finds the centre of the box, but is cleared away after a scramble

A strong run from Deanne Rose leads a to cross to Jordan Huitema, but her header is off the mark.

Aslani finds the head of Lina Hurtig with her corner, but the deflection drifts just wide of the Canadian net.

Aslani's corner finds a crowd in the centre of the Canadian box, but the chance is cleared away.

The first half of extra time solved nothing as the two teams remain deadlocked at 1-1.

104' Aslani gets a yellow card

Kosovare Asllani becomes just the second player cautioned in the gold medal game, picking up a yellow card in the offensive end.

Jonna Andersson tries a shot from 30 yards out that goes just over the crossbar above Stephane Labbe.

Stina Blackstenius tries a shot from just outside Canada's penalty area and puts it well wide.

Canada forces Sweden to scramble in their own box and end the effort with a  Julia Grosso shot on net that was saved by Hedvig Lindahl.

Jayde Riviere comes on to replace Allysha Chapman on the backline for Canada.

Adriana Leon kicks off and extra time is underway.

This is the first time Sweden has headed to extra time this tournament. Second time for Canada.

Thirty minutes of extra time will be added to decide the gold medal game.

Jessie Fleming tries to play the hero with a shot from outside the box, but puts it just over the net.

Four minutes of penalty time have been added to try to solve the gold medal game in regulation.

Sweden with a big chance in Canada's box with Labbe out of her net, but Buchanan covers and blocks the attempt from Aslani.

86’ Canadian sub. Sinclair, who looks to be labouring, comes off for Huitema

Canadian goal-scorer Jessie Fleming is down with an apparent cramp. Both sides are taking the opportunity to hydrate. Fleming appears to be OK.

Sweden have been pressuring the Canada, but unable to find a clear chance. Aslani takes a weak shot from outside the box that is stopped by Labbe.

Fridolina Rolfö goes unmarked in the box and puts her shot just wide.

79’ Rolfo shot just goes wide after some missed assignment by Canada in the box.

Deanne Rose with a rush into the Swedish box but she elects to pass over shoot and has her attempt cleared.

78’ Nice work by Rose but she opts to pass and the threat is over.

Fresh off the tying goal, Canada is putting heavy pressure on Sweden. Fleming has a go from inside the box, but puts it just too high.

Jessie Fleming scores on a penalty for the second straight game. The two sides are tied 1-1.

Jessie Fleming scores on a penalty kick, just like in the semifinal against the USA 🙌

Canada will have a kick from the spot after a VAR check. Jessie Fleming will take it.

VAR is checking a potential penalty for Canada after Christine Sinclair appeared to be fouled in the Swedish box.

After several minutes of Swedish pressure, Christine Sinclair draws a foul to end a corner kick from Sweden.

Labbe reaches over several players to grab a in-swinging corner from Sweden.

Following several minutes of pressure for Canada, Julia Grosso has her first attempt of the game, blasting a shot from outside of the box that goes over the net.

47' Prince gets a shot on target

Nichelle Prince makes her way into the Swedish box and gets a tough angle shot on net that is saved by the Swedish keeper.

48’ Some good movement by Prince, but an easy save in the end.

Sweden dominates the final five minutes before half, but Canada holds on to enter the second half down 1-0.

HT 1-0 Sweden. Swedes we’re on the front door for the latter half of the first 45.

Aslani's free kick into the Canadian box leads to multiple efforts by Sweden before the ball deflects out of play.

Janine Beckie tries a cross into the box, but has it intercepted by Swedish keeper Hedvig Lindahl.

After a Canadian turnover in their on half, Kosovare Asllani rushes down to the right flank and centres to Stina Blackstenius whose deflected shot beat Labbe to put Sweden up 1-0.

After dominating play for the past five minutes, Sweden gets another ball into the Canadian box and appeal for handball on Quinn, but the referee says play on.

Stephanie Labbe makes a terrific reaction save to keep out a Swedish header.

After Christine Sinclair was stopped by the Swedish defence as she tried to break through into the penalty area, Jessie Fleming fires the loose ball over the net.

27' Beckie picks up a yellow card

Janine Beckie picks up the first yellow card of the game for a challenge on Caroline Seger.

Janine Beckie gets through a defender and into the Swedish box, but can't find Nichelle Prince with her centreing pass.

Nichelle Prince drives down the left flank and tries to find Janine Beckie, who misses a chance to deflect it in for Canada.

21’ Beckie seems to think she’s off - which she might have been. She lets the ball go by on more excellent work from Prince

Janine Beckie worries the Swedish backline with a low corner that was deflected out of play as it crossed the face of goal. Desiree Scott has a go from distance after the corner, but puts it too high.

17' Labbe with a strong save

Fridolina Rolfö tests Labbe with a strong shot from distance, but the Canadian goaltender knocks down the ball and covers.

17’ Labbe nice stop on shot from Rolfo from distance

Prince makes her way into the Swedish box and attempts a centreing pass, but has it blocked.

Swedish star Kosovare Asllani rushes into the right edge of the box and has her cross deflected for a corner. Christine Sinclair was fouled on the corner, leading to a Canada free kick.

Sweden's Magdalena Eriksson has a go from outside the box, but puts her shot well off target.

Sweden gets a shot off after getting the ball into the box, but after bouncing off multiple players, Canada manages to clear.

Nichelle Prince rushed down the right flank to win a corner for Canada in the sixth minute. Vanessa GIlles got her head on the end of the corner kick, but couldn't find the target.

Sweden won the first corner of the game in the second minute but the effort was punched away by Canadian goaltender Stephanie Labbe.

Canada is sticking with the same starting XI from their upset victory over Team USA, captained by striker Christine Sinclair.

After toppling archrival U.S. in the semifinal, Canada's women's soccer team is set to go for gold against Sweden.

The gold medal match kicks off at 9 p.m. local time — 8 a.m. eastern — after both teams requested a later start to avoid the worst of the midday heat.

Organizers also changed the venue from Tokyo's Olympic Stadium to International Stadium Yokohama, about 20 kilometres to the southwest, to prevent a conflict with the track and field program.

The Swedes are slight favourites heading into the match, having started the Olympics ranked No. 5 in the world to Canada's No. 8.

They've also won all of their matches in Tokyo, going a perfect 3-0 in the group stage while Canada finished with a win and two ties.

Win or lose, the Canadian side will fulfil its promise of changing the colour of its bronze medal from the last two Olympics, while Sweden is looking to improve on its silver medal from Rio in 2016.

- From the Canadian Press