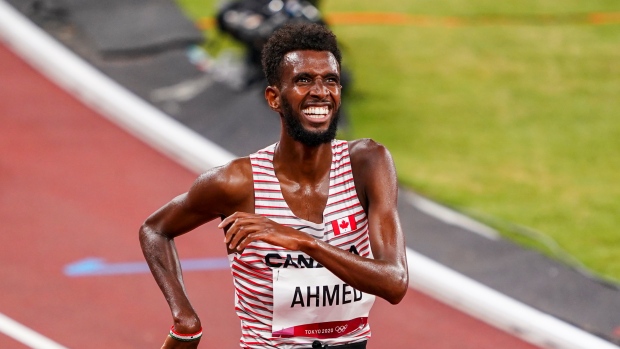 TOKYO — Canada's Moh Ahmed has won a silver medal with a gutsy effort in the men's 5,000 metres at the Tokyo Olympics.

Ahmed ran a fast final lap and challenged Joshua Cheptegei, the world record holder in the distance, for the gold on the final stretch, but couldn't catch the Ugandan.

It's Canada's first Olympic medal in the men's 5,000, and it's fitting that Ahmed delivered it.

The 30-year-old runner from St. Catharines, Ont., has blazed a trail for Canadian distance runners on the global scene in the past few years.

Last summer, he sliced 11 seconds off his own Canadian record, running 12:47.20 seconds in a high-performance meet in Portland, where he trains with the Bowerman Track Club.

It was also a North American record, and saw Ahmed crack the top 10 all-time in that distance in the world.

Ahmed opened the Tokyo Olympics with a sixth place in the 10,000 metres, taking the lead with less than two laps to go before running out of gas over the final 300 metres.

The 25-year-old went a year without racing due to the COVID-19 pandemic.

But at the Golden Gala in June in Florence, Italy, in his first 5,000 since the 2019 world championships, he slashed 18 seconds off his personal best time, and became the second North American in history behind Ahmed.