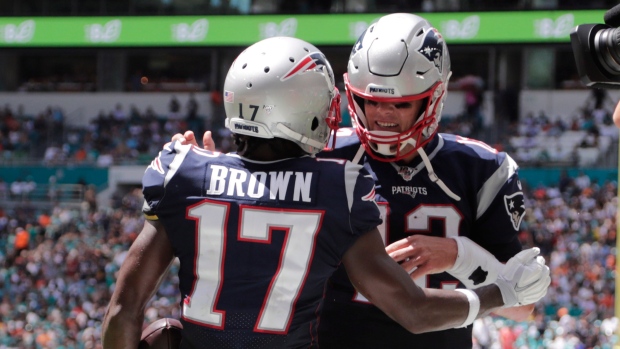 New England Patriots quarterback Tom Brady said Monday he wasn't willing to share his feelings on Antonio Brown's release after a brief stint with the team.

"I do have a lot of personal feelings, none of which I want to share," Brady told The Greg Hill Show on WEEI Boston. "It is a difficult situation. That is how I feel."

Brady added that he cares "deeply" about his teammates and tries to provide whatever is needed to help "to help them reach their highest potential - whatever situation it is."

Tom Brady, on @TheGregHillShow, speaks from a philosophical perspective after initially being asked about the release of Antonio Brown. pic.twitter.com/9bYdrOz7IC

The Patriots released Brown on Friday after the wide receiver sent intimidating texts to a woman who accused him of sexual misconduct.

He was signed by New England just ahead of their first game after being released by the Oakland Raiders because of off-field issues, including a heated exchange with general manager Mike Mayock. He was accused of rape by a different woman in a Florida civil lawsuit just days after being signed by the Patriots.

Brown took to Twitter on Sunday to announce he "will not be playing in the NFL anymore," while taking shots at Patriots owner Robert Kraft and former teammate Ben Roethlisberger.

In his lone game with the Patriots, Brown had four receptions for 56 yards and a touchdown in a 43-0 win over the Miami Dolphins.