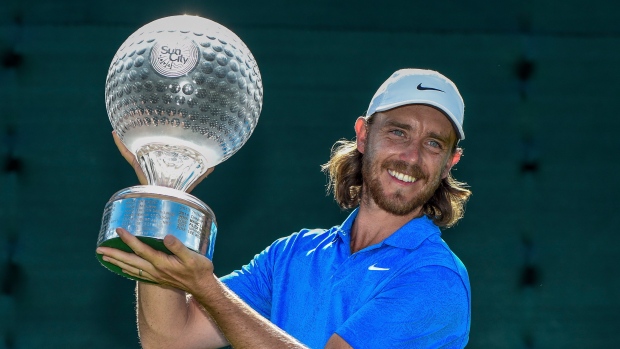 SUN CITY, South Africa — Tommy Fleetwood made three eagles for a 7-under 65 and rallied from a six-shot deficit to win the Nedbank Golf Challenge in a playoff Sunday.

Fleetwood only needed a par on the 18th hole in the playoff when Kinhult, who closed with a 68, missed the fairway and had to chip out sideways.

Fleetwood won $2.5 million and moved to No. 2 in the Race to Dubai behind Bernd Wiesberger of Austria, who tied for third at Sun City. The season ends next week with the DP World Tour Championship in Dubai.

The 28-year-old Fleetwood won the Race to Dubai in 2017 and has a chance of being crowned Europe’s No. 1 for the second time in three seasons.

Zander Lombard of South Africa, who had the 54-hole lead, closed with a 77 and tied for eighth.

The leading five players going into Dubai are Wiesberger, Fleetwood, Jon Rahm, Shane Lowry and Matt Fitzpatrick. Rahm did not play the last two Rolex Series events that lead to the season finale.

PLAYA DEL CARMEN, Mexico (AP) — Brendon Todd and Vaughn Taylor were tied for the lead with four holes remaining in the rain-delayed Mayakoba Golf Classic when play was suspended because of darkness.

Todd, coming off a victory in the Bermuda Championship two weeks ago, shot a 6-under 65 on Sunday morning to take a one-shot lead into the final round over Taylor (66) and Harris English (68).

They all remained in the mix, along with Carlos Ortiz, challenging for his first PGA Tour victory before a home crowd in Mexico. Ortiz was one shot behind and chose not to play the 18th hole when it became too dark for him to properly see.

Todd and Taylor were at 20-under par, one ahead of English and Ortiz. Taylor came up short on the par-3 15th and pitched to 5 feet. Todd and English had birdie putts from the 20-foot range on the hole.

Todd had a two-shot lead until he failed to get up-and-down from just off the green on the par-5 13th, and then hit a heavy chip and missed a 7-foot par putt on the next hole.

The tournament did not start until Friday because heavy rain washed out the opening round.

SHIZUOKA, Japan (AP) — Takumi Kanaya became the fourth amateur to win a Japan Golf Tour event when he made a 20-foot eagle putt on the final hole for a 5-under 65 and a one-shot victory in the Visa Taheiyo Masters.

Takumi, the 21-year-old junior in college, won the Asia Pacific Amateur in 2018 and played in the Masters this year.

He shot 31 on the back nine, and his eagle gave him the victory over Shaun Norris of South Africa.

Kanaya joined Hideki Matsuyama in 2011, Ryo Ishikawa in 2007 and Massy Kuramoto in 1980 as amateurs to win on the Japan Golf Tour.

Joohyung Kim closed with a 7-under 65 for a one-shot victory over S. Chikkarangappa and Shiv Kapur in the Panasonic Open India on the Asian Tour. ... Ricardo Celia closed with a 4-under 66 and beat Brandon Matthew with a birdie on the third playoff hole in the Visa Argentina Open on the PGA Tour Latinoamerica. ... Ai Suzuki won for the second straight week, closing with a 5-under 67 for a one-shot victory in the Ito-En Ladies Golf Tournament on the Japan LPGA. Suzuki won the Toto Japan Classic last week, a tournament co-sanctioned with the LPGA Tour.