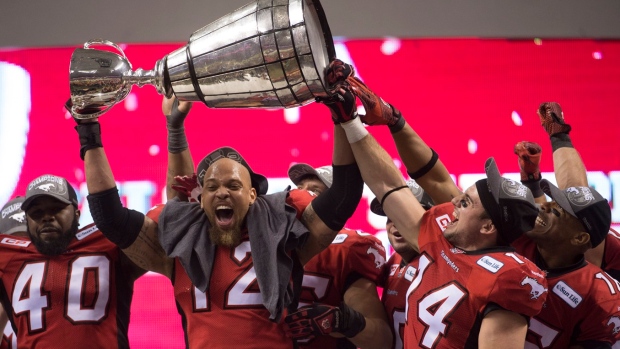 The Canadian Football League released their 2015 game schedule Friday. Here is a look at 10 storylines to follow when the season kicks off.

The schedule culminates with the 103rd Grey Cup on Sunday, November 29 at beautiful Investors Group Field in Winnipeg, Manitoba where the 2015 champions will be crowned.  This will be the first time since 2006 that the game has been hosted in Winnipeg.

The regular season kicks off with the Ottawa Redblacks visiting the Montreal Alouettes on June 25th – the first of 10 regular season Thursday night games during the summer months.  This will also give fans a first look at a new re-tooled Ottawa offence that added star receivers Maurice Price, Ernest Jackson, Brad Sinopoli and Greg Ellingson as targets for quarterback Henry Burris.

It won't take long for the Hamilton Tiger-Cats to try and get even with the Calgary Stampeders. The defending Grey Cup champs officially begin their title defence against the team that almost squeeked out a win at BC Place last November.

With the Toronto 2015 Pan AM and Parapan Am games dominating the sporting landscape in southern Ontario this summer, the CFL visits a brand new market: Fort McMurray, located in the Regional Municipality of Wood Buffalo, where the Toronto Argonauts will play the Edmonton Eskimos on Saturday, June 27, in the regular season opener for both teams.

Hamilton doesn't host their home opener until August 3rd against Toronto.  The real question is who will be the first to knock off the Eastern champs at home?  Since moving into Tim Horton's Field last September the Ticats have yet to lose.  Can they run the table in the Hammer?

6. The Battle of Alberta

This rival has been re-ignited but Calgary took all three regular season contests last year.  The battle is as intense as it has been in a long while and September 9th and 12th, along with October 10th should be must-watch for anyone who likes two foes go at it.

He was only there two seasons but Ricky Foley was an instant fan favourite in Saskatchewan after helping them catpure the 101st Grey Cup.  He is now back in Toronto and the Argos make their first and only visit to Mosaic in Week 2 on July 5th.

8. Stamps back in Edmonton

A return of different sorts, Fred Stamps is one of the best receiver the Eskimos have seen in decades and after spending his entire career in Edmonton, he was traded to Montreal in the off-season.  He and the Alouettes make their annual visit to Commonwealth Stadium on November 1st.

A new era begins in Vancouver as the BC Lions and their new head coach Jeff Tedford, debut on Saturday, July 4, when they travel to Ottawa.

10. Holidays in the Hammer

The Hamilton Tiger-Cats host the Toronto Argonauts at Tim Hortons Field on not one but two holiday Mondays: their home opener on Monday, August 3, and the Labour Day Classic on Monday, September 7.