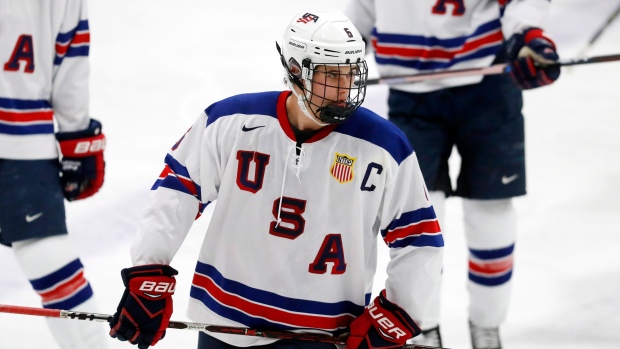 VANCOUVER — Some of the world's best young hockey talents will go head-to-head in Victoria and Vancouver next week.

The 2019 world junior hockey championship kicks off on Tuesday, featuring dozens of athletes likely to carve out careers in the NHL.

Here are five storylines you'll want to watch at this year's tournament:

Hockey fans will get a peek at the teen who's expected to go No. 1 at next year's NHL draft — and he'll be playing with his older brother.

Both Quinn and Jack Hughes will be key pieces for the U.S. team.

Seventeen-year-old Jack has already earned a reputation as a speedy, highly-skilled and high-scoring centre. Currently playing with the U.S. development team, he's an early favourite to be the first overall draft pick in June.

He'll be one of three returning defencemen for the U.S. junior team, and has spent this season as a sophomore at the University of Michigan. Quinn already has three goals and 17 assists for the Wolverines this year, closing in on the 29 points he tallied in his rookie campaign.

The Hughes brothers shared the ice at the world junior showcase in Kamloops, B.C., last summer, connecting on some highlight-reel worthy goals.

U.S. junior team coach Mike Hastings said at the time that the pair have obvious chemistry, talent and passion for the game.

It's been a long time since last year's silver medallists lost a match up in the group stage — 11 tournaments (or 44 games) to be precise.

Though Sweden has dominated in round-robin play, they have captured just one gold medal in the same stretch, taking the championship title in 2012.

Keeping the streak alive may be difficult this year. The Swedes are in a group with the United States, Finland, Slovakia and Kazakhstan.

They'll also be without 18-year-old defenceman Rasmus Dahlin, who is busy tearing up the NHL with the Buffalo Sabres.

Timothy Liljegren of the American Hockey League's Toronto Marlies won't be in the lineup after he suffered a high-ankle sprain earlier this month.

But the Swedes will still get some solid defensive play from Liljegren's Marlies teammate Rasmus Sandin, and Adam Boqvist, who's with the Ontario Hockey League's London Knights.

CANUCKS IN THE CREASE

Mike DiPietro used the disappointment of being cut from last year's junior squad as fuel as he evolved into one of the best netminders in the Canadian Hockey League.

After selection camp, he set an alarm on his phone that would periodically blast a stark message on to the screen: "Got cut from world juniors." The message motivated the Vancouver Canucks prospect to push a little harder when he returned to the Windsor Spitfires.

It worked. DiPietro's performance in net earned him goaltender of the year honours from the Ontario Hockey League last season.

His success has continued this year, first with the Spitfires and now the Ottawa 67s. He's posted a 12-8-0 record with a 2.26 goals-against average and a .922 save percentage.

Now the 19-year-old Amherstburg, Ont., native will be one of Canada's two goalies in this year's tournament.

The other is Calgary's Ian Scott, who has been a brick wall for the Western Hockey League's Prince Albert Raiders. He boasts a 23-2-0 record this season with a 1.61 goals-against average and a stunning .943 save percentage.

Earlier this month, the 19-year-old signed a three-year entry-level contract with the Toronto Maple Leafs.

While the athletes making up the squad aren't necessarily household names, many play in the Kontinental Hockey League's feeder league, known as the MHL.

Hockey fans may be surprised to see the Central Asian country listed among the tournament contenders, but this isn't the first year the Kazakhstanis have participated. They were last in the tournament in 2009.

And they have played giant-killer before, upsetting Canada 6-3 in the 1998 world junior championship in Finland.

While Canada is a perennial world juniors powerhouse, some other countries come and go, depending on their performance the year before.

After round-robin play, the two last-placed teams play a best-of-three relegation series where the winner retains their spot in the tournament. The loser is sent down to play in Division I Group A.

Attendance at world junior hockey games has dwindled in recent years and thousands of seats sat empty at many matches in Buffalo, N.Y., last December.

Officials have said the geographic market may have been over-saturated with the tournament being held in Buffalo and Toronto/Montreal three times in four years.

Will moving to the West Coast bring in crowds?

According to tournament director Riley Wiwchar, demand for tickets to this year's games has "exceeded expectations."

Tickets have been purchased from France, Germany, Russia, Finland, Sweden, the United States and every Canadian province, he said.

Vancouver's Rogers Arena has a capacity of 18,910 and Victoria's Save-on-Foods Memorial Centre has room for 7,400 people.