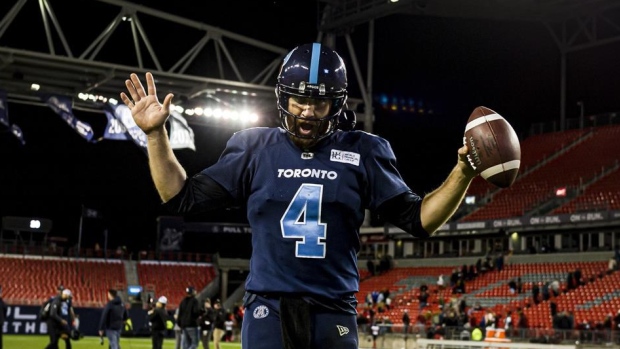 TORONTO — Head coach Ryan Dinwiddie will have to wait until Sunday to learn who the Toronto Argonauts' starting quarterback will be in the East Division final.

The Argos held starter McLeod Bethel-Thompson out of practice and sent him home Friday after he attended the Toronto Raptors' 97-93 home win over the Milwaukee Bucks on Thursday night. Bethel-Thompson's appearance violated the CFL's COVID-19 protocol, which prohibits players from attending large sporting events.

Usually, that would've meant Bethel-Thompson having to quarantine for four days and provide two negative tests before being able to resume team activities. But Toronto hosts the Hamilton Tiger-Cats in the conference final Sunday afternoon at BMO Field.

On Friday, the CFL said Bethel-Thompson will be allowed to play Sunday if he produced negative PCR tests Friday and Saturday as well as a negative Rapid Antigen Test on Sunday following a 48-hour quarantine at his residence.

Argos Dexter McCoil, Charleston Hughes, Llevi Noel and Jeff Richards also attended the basketball game and were sent home by the team Friday. The CFL said the four players will be subject to the same requirements as Bethel-Thompson in order to suit up Sunday.

The CFL leaving the door open for Bethel-Thompson and the other Argos to play was a huge relief for Dinwiddie, who's completing his first season as Argos head coach.

"That's good news, I think I'll sleep better at night," he said. "You kind of get a pit in your stomach when you find out what happened.

"As a coach you kind of look after everybody else . . . it's good news. I just would feel horrible for Mac if he couldn't compete in the game Sunday."

Bethel-Thompson, 33, was 7-2 as the starter this season as Toronto (9-5) finished atop the East Division to secure home-field advantage for the final. The Argos won three-of-four regular-season meetings with second-place Hamilton (8-6).

If Bethel-Thompson can't play Sunday, backup Antonio Pipkin will go under centre for Toronto. The six-foot-three, 225-pound Pipkin started the Argos' season-ending 13-7 home loss to Edmonton on Nov. 16, completing 10-of-22 passes for 111 yards and an interception while rushing for 78 yards and a TD on nine carries.

Pipkin also has previous starting experience with the Montreal Alouettes.

Dinwiddie knows all too well what it's like to be thrust into the starting lineup. His first CFL start was in the '07 Grey Cup game for the Winnipeg Blue Bombers after incumbent Kevin Glenn was injured late in the East Division final.

Dinwiddie had a TD pass but also threw three interceptions in a 23-18 loss to the Saskatchewan Roughriders at Rogers Centre.

"The thing for me is I had the whole week to prepare to be the starter," Dinwiddie said. "If Mac can't play and we have to go with Pip, he'll have the one day (Saturday) and didn't have the whole week to get mentally focused and ready to go out Sunday and play well.

That will mean burning the midnight oil with Pipkin and Toronto's offensive coaches to ensure the Argos are prepared should the worst-case scenario come about. And also remaining in touch with Bethel-Thompson virtually.

"A little bit of a distraction but I think our guys are honed in and understand the importance of the game," Dinwiddie said. "We had a good talk after practice . . . you just have to find ways to overcome the adversity.

"We've had to do that (virtual meetings) all year."

Dinwiddie was unable to shed any light on why Bethel-Thompson and the other Toronto players were at the basketball game, given the CFL's COVID-19 protocols. Both the Argos and Raptors are owned by Maple Leafs Sports & Entertainment.

"I think it was an honest mistake," said Dinwiddie. "We're trying to do our best to follow all the protocols and rules.

"I just think we're trying to promote the game and promote the league at the same time to get some fans in the seats and make it a good thing."

Video of Bethel-Thompson holding his infant daughter at the NBA game was carried on the Argos' Twitter account Thursday night but was no longer available Friday. However, it was up long enough for Hamilton receiver Brandon Banks to notice.

"Wow when I tried to go to Raptors game the CFL told me I couldn’t go!" Banks tweeted. "I ain’t snitching but (expletive) fishy !"

Bethel-Thompson also appeared on TSN's broadcast of the Raptors-Bucks game. TSN is the CFL's broadcast partner.

"So lemme get this straight," TSN's Kayla Grey, who interviewed Bethel-Thompson during the broadcast, tweeted Friday. " … a starting quarterback goes on a national broadcast to promote an East Final that he is now forced to miss because the league is forcing him to quarantine for going to a game to promote said East Final?