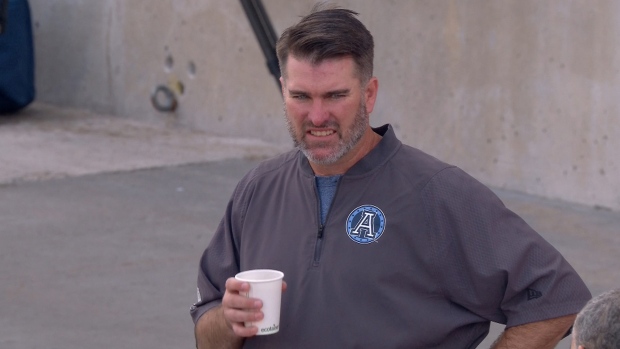 The CFL Division Finals on Sunday begin in Toronto, with the Argonauts hosting the Hamilton Tiger-Cats in the East Division Final at BMO Field. This is just the second time the two teams have met in the Eastern Final since 1986.

The Argos will play their first playoff game since winning the Grey Cup in 2017 and first with team legend Mike “Pinball” Clemons as general manager. The Argonauts finished the regular season atop the East Division and are in search of a CFL-leading 18th Grey Cup victory.

The Tiger-Cats shut down a powerful Montreal Alouettes’ offence in the Eastern Semi-Final to make their third-consecutive Eastern Final. With a win, the Ticats would reach their second consecutive Grey Cup, which is being held at Tim Hortons Field in Hamilton on Dec. 12.

Ahead of Sunday’s Division Final, TSN examines how the top two teams in the East in 2021 stack up with a trip to the Grey Cup on the line.

The Argos completely turned their fortunes around in their first full season with Clemons as general manager. After winning the Grey Cup in 2017, Toronto finished 4-14 in 2018 and 2019, the two worst seasons the club has produced since 2009.

This was also head coach Ryan Dinwiddie’s first at the helm since he was hired in December of 2019. Clemons credits the coaching staff and the collective commitment of everyone in the organization for the turnaround.

After a season of not even making the playoffs, the Argonauts find themselves in the East final against the Tiger-Cats. Toronto GM Michael "Pinball" Clemons joins Jay to discuss his team's turnaround this year and what he expects from Hamilton.

“It was a collaborative effort for sure. It’s just a great team of people who came together and really committed to each other,” said Clemons. “Ryan Dinwiddie is up for coach of the year and rightly so. If you see the number of hours he spent during the pandemic, while others were maybe wondering if there was going to be a season, during all that time he was working. I’m so proud of him. [Dinwiddie] and his staff have worked their way into this position.”

With the Argos set to make their first playoff appearances in three years, Clemons relishes the chance for his team to prove itself against the long-time QEW rival Ticats, who entered the 2021 season as heavy favourites to win the East.

“Could not be a better opponent. The Hamilton Tiger-Cats finished first in the East last year while we were at the bottom of the barrel,” said Clemons. ‘They were called to be the first-place team this year and we snuck in there. We know they are a very tough team and until we beat them in a playoff situation, you still have to say that they’re the best team.

“We’ve got a lot to prove on our side. Both sides will have so much energy, so much passion.”

There is uncertainty at quarterback heading into the game for the Argos.

After attending a Toronto Raptors game on Thursday night in violation of CFL COVID protocol, starter McLeod Bethel-Thompson must produce negative results in a battery of tests ahead of Sunday's game in order to be permitted to play.

Bethel-Thompson beat out off-season acquisition Nick Arbuckle for the starting job in Week 8. With Bethel-Thompson as the starter, the Argonauts had a 7-2 record while averaging 24.4 points per game. Should he not be cleared, Antonio Pipkin is Sunday's likely starter for the Boatmen.

Regardless of who starts under centre, Clemons realizes that the Double Blue will need to step up in all aspects of the game to have a chance against the Ticats and their stifling defence on Sunday.

“It’s going to take work,” said Clemons. “Not only are they a great defence, but they have the reigning Most Outstanding Player of the Year on their offence and their quarterback is extremely mobile.

“They just dominated the line of scrimmage. They shut down William Stanback. Ja’Gared Davis, Ted Laurent, Dylan Wynn, and Julian Howsare. These guys were phenomenal,” said CFL on TSN panelist Matt Dunigan. “The entire game, they shut down the run. It was a dominant defensive performance that gives them a chance to go to the Eastern Final against the Toronto Argonauts.”

The Tiger-Cats have momentum on their side entering the Eastern Final, having won five of their past six games. The only loss during this stretch has come at the hands of the Argonauts.

Despite starting the season 0-2, the Tiger-Cats finished the season strong, a turnaround that starting quarterback Jeremiah Masoli credits to the team’s resiliency and defence.

“We’re a resilient bunch. We’re built for adversity,” said Masoli, following last week’s win over the Als. “We took those lessons early in the year and worked on it and made a conscious effort to finish.

“Those guys are playing lights out. We’re fortunate enough for our offence to have such a great defence.”

Defensive end Ja’Gared Davis finished last Sunday’s win with two sacks and a pass deflection and says the entire team is ready to put in the work to move past the Argos and host the 108th Grey Cup.

“We’re going to talk with our play on the field. That’s what dictates it, said Davis, following the win over the Als. “Now we have to get back to the drawing board and do it again next week.

“We have to be a better us. We came out and executed today but [next week] we have to execute to a higher level,” said Davis. “The stakes are higher and I’m not trying to go home yet. I want a ring on my finger when it’s all said and done. The Argos are our next opponent so that’s who we have to go through.”

The Argos and Ticats faced off four times this season with Toronto taking the season series 3-1.

Hamilton took the first meeting 32-19 in Week 5. Ticats backup Dane Evans, filling in for the injured Jeremiah Masoli, passed for two touchdowns in the victory. The Argos bounced back to scrape out 17-16 victory in Week 6, despite Arbuckle tossing a pair of interceptions in the win. This would mark the final game Arbuckle would win before being replaced by Bethel-Thompson as the starting quarterback.

The teams would meet again in Week 10 with the team’s current starters facing off the first time in 2021. The pair did not disappoint as Bethel-Thompson passed for 388 yards and a pair of scores, earning a narrow 24-23 victory after overcoming a 12-point fourth-quarter deficit. Masoli threw for 361 yards and two touchdowns in the loss.

The fourth and final meeting between the teams was not as close as the Week 6 and 10 thrillers, as the Argos coasted to a 31-12 victory.

A concerning trend emerged for the Tiger-Cats against the Argonauts. Despite having the second-highest scoring offence in the CFL, Hamilton struggled to crack the Argos defence at times, a problem that TSN CFL Insider Dave Naylor says the Ticats need to correct in order to advance to the Grey Cup.

“The Hamilton Tiger-Cats were the second-highest scoring team in the CFL this year. But when you look at their two lowest output games, after the 0-2 start, they were both against the Toronto Argonauts,” said Naylor. “In their most recent games against Toronto, Hamilton scored 16 points in one game and 12 in another. I think they’re going to have to go back to school on those games and figure out what the Argonauts were doing to shut down that offence.

“The offence had an okay today. It was good enough because the defence had a spectacular day but I don’t think 12 or 16 points is going to be enough to get it done next week in the East Division Final at Toronto.”

Despite dominating the Ticats during the regular season, the Argonauts do not plan to take their longtime rivals lightly.

“They’re our rivals, they’re right next to us, and to be honest they were the ‘Kings of the East’, said Argos linebacker Henoc Muamba told TSN. “We knew we would need a higher level of focus every time we played against them, especially having lost to them the first time [we met].”