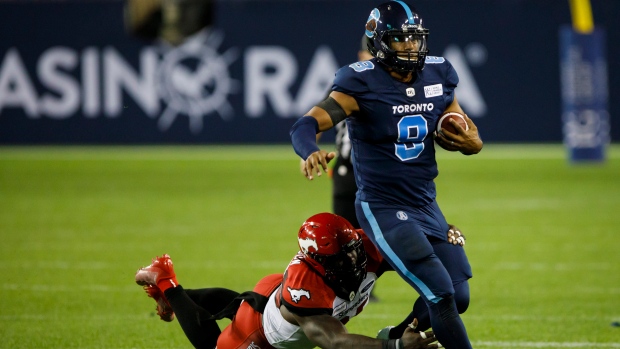 After both McLeod Bethel-Thompson and James Franklin saw time in the Toronto Argonauts' 23-16 loss to the Calgary Stampeders Friday, head coach Corey Chamblin would not confirm who the team's starting quarterback will be for their next game.

Corey Chamblin will not confirm who his starting quarterback (McLeod Bethel-Thompson or James Feanklin) will be next game. #Argos will meet Saturday morning and begin assessing offence then #CFL

TSN's Matthew Scianitti reported the Argos will meet Saturday morning and begin assessing their offence then ahead of their Week 16 home game against the Saskatchewan Roughriders next Saturday.

Bethel-Thompson started Friday's game against the Stampeders and went 12-19 for 86 yards and an interception before getting replaced by Franklin, who finished 12-16 for 147 yards and a touchdown.

After Franklin started the season as the Argos' top QB, Bethel-Thompson had taken over the starting job and led the Argos to a win over the Ottawa Redblacks in Week 13.

The Argos also have quarterbacks Dakota Prukop and Michael O'Connor, a Canadian, on their roster. Zach Collaros, whom they acquired from the Saskatchewan Roughriders earlier this season, is on the six-game injured list.