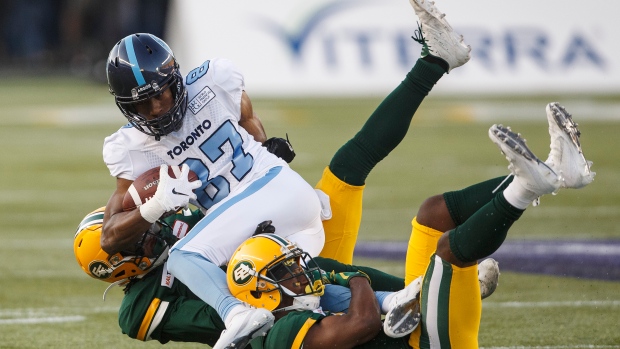 It appears the Toronto Argonauts have moved on from free agent wide receiver Darel Walker.

TSN Football Insider Dave Naylor reports that any chance the Argonauts would retain Walker seemed to have disappeared when the team signed receivers TJ Jones and DaVaris Daniels for $200,000 each.

Any chance the @TorontoArgos could retain WR Derel Walker would seem to have disappeared when they signed WR’s TJ Jones and DaVaris Daniels for $200K apiece.#Argos

Walker spent last season with the Argonauts after four years with the Edmonton Eskimos. He has 65 receptions for 1,040 yards and six touchdowns.

Naylor said Tuesday he'd be surprised if Walker doesn't end up signing with the B.C. Lions, where he would reunite with quarterback Mike Reilly.

Jones, 27, is set to make his CFL debut with the Argonauts after six seasons in the NFL. A sixth-round pick of the Detroit Lions in 2014, Jones appeared in three games with the New York Giants last season, posting three receptions for 38 yards and one touchdown.

In 45 career NFL games with the Lions and Giants, the Canadian wide out posted 67 receptions for 852 yards and five touchdowns.