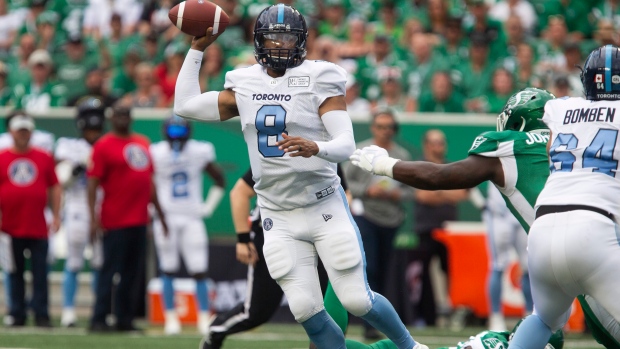 TORONTO — McLeod Bethel-Thompson has another shot at being the Toronto Argonauts No. 1 quarterback.

Bethel-Thompson will start Saturday night when Toronto (0-2) hosts the B.C. Lions (0-3) and could be the club's starter for some time. After starting the opening two games, incumbent James Franklin went on the six-game injured list Wednesday after suffering a hamstring injury in the Argos' 32-7 road loss to Saskatchewan on Monday night.

"That (Franklin injury) is always unfortunate, but the fortunate part is we do have another No. 1 quarterback sitting there," Argos head coach Corey Chamblin said. "There's definitely an injury there so (Franklin) needs that time to heal and get himself back where he needs to be."

Bethel-Thompson, 31, replaced Franklin as the starter last season. He guided the Argos to consecutive wins over Ottawa and B.C., but after six straight losses relinquished starting duties back to Franklin as Toronto (4-14) missed the CFL playoffs after winning the '17 Grey Cup.

"He's been around, he's been in several systems so he should be poised that way," Chamblin said of Bethel-Thompson. "Like any quarterback he needs to make sure he makes the right decisions and protects the football.

"This is his opportunity and it's an opportunity he needs to take hold of and get the offence headed in the right direction and go from there."

The San Francisco native also had a solid training camp, completing 17-of-24 passes for 353 yards and three TDs as Toronto won both of its exhibition games.

But it's been a rough start to the regular season. Toronto has been outscored 96-21 in its two losses, allowed over 1,100 yards and stands last in several offensive categories.

Third-year pro Dakota Prukop will back up Bethel-Thompson with Canadian rookie Michael O'Connor being the No. 3 quarterback. Prukop's promotion means Toronto must replace him on special teams but Chamblin hopes O'Connor, a 2019 third-round draft pick, doesn't see the field.

"His time will come," Chamblin said. "Mike's not ready to go out and lead us to victory, there's still some things he needs to learn to be a pro.

"He's doing a good job of progressing but we're not ready to see him right now."

And while Franklin will be out for a while, Bethel-Thompson isn't looking past B.C.

"There's another quarterback right behind me," he said. "I've got to put points on the board, we've got to win games."

Bethel-Thompson feels his job will also be getting big-play receivers Derel Walker, S.J. Green and Armanti Edwards more involved in the offence.

Walker, a two-time 1,000-yard receiver with Edmonton, was Toronto's biggest free-agent acquisition this season. Green has cracked that plateau the last two seasons and six times overall while Edwards registered over 900 yards the last two years.

The trio has combined for 21 catches for 334 yards and a TD. Comparatively, Hamilton's Brandon Banks is the CFL's receiving leader with 334 yards on 20 receptions with a touchdown.

"To get them comfortable, to get them into the flow and get their confidence up that's my job," Bethel-Thompson said. "My job isn't to win the game, it's to decide who's going to win the game.

"Those guys are awesome all-star receivers and my job is to make their job easy."

"You want to get the taste of the last game out of your mouth," he said. "At the same time you want to have time to prepare and get ready for your opponent.

"It just means you've got to take more advantage of each minute of each day. There's no fluff, there's no extra here, there's no space for distractions, there's just right now, today. That's all we have. All that exists in the world is this moment."

Bethel-Thompson said it's up to each Argos player to take ownership of the team's start.

"I think everyone in that locker room has to take a gut check, look at their own work and what they put in," he said. "The definition of insanity is doing the same thing and expecting a different result.

"So do something different this week, prepare differently, walk out there differently, build a different mentality. I think we've all got to go in there with an intense belief in each other and ourselves."

Bethel-Thompson wore No. 14 last year but has switched to No. 4 to accommodate defensive back Abdul Kanneh.

"He's got a pretty sweet chain," Bethel-Thompson said. "I don't know how many carats that thing has or how expensive it is.