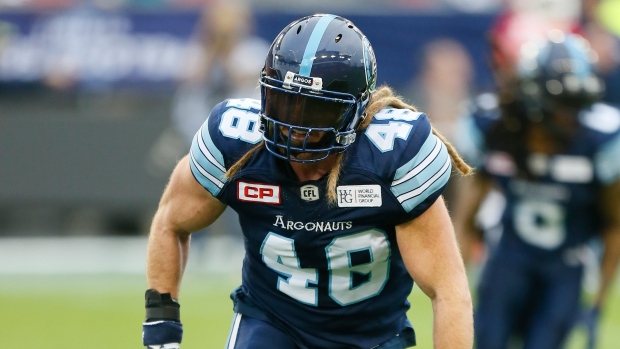 The Toronto Argonauts and linebacker Bear Woods agreed to a restructured contract.

Woods is entering his fourth season with the Argonauts. The 34-year-old played in three games with the Double Blue in 2019, recording 25 tackles and a sack.

“Bear is the ultimate teammate with a work ethic that is unmatched,” Argos linebackers coach Kevin Eiben said. “He is as professional as they come and his knowledge of the game mixed with his preparedness and competitiveness is an incredible resource for our younger guys to learn from. On top of all that, Bear is one of the best tacklers I have ever been around, we’re lucky to have him.”

The two-time CFL All-Star and East Division nominee for Most Outstanding Defensive Player in 2016 played the first four seasons of his CFL career with the Montreal Alouettes (2013-16).

He has 376 tackles, 15 sacks, and three interceptions in 64 regular season games.