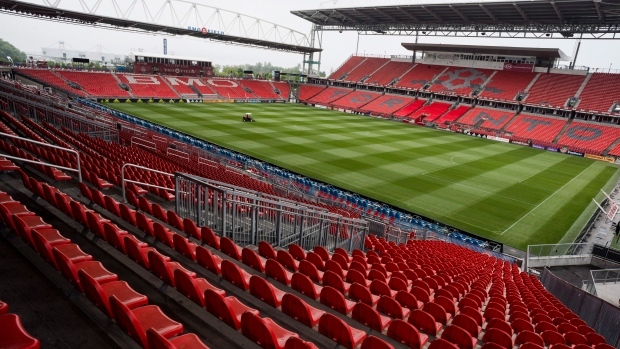 Toronto FC and CF Montreal have been given the green light to play at home this weekend, with a limited number of fans in the stands.

Wednesday's league update on Canadian home-market games only covers the next few weeks with two TFC and one Montreal match affected.

"TFC has federal government permission to play next 2 home games in Toronto. American MLS teams may only bring fully vaxed players to Canada. Expect announcement Friday re which players are eligible to cross border. Gov't has made no decision on approvsls beyond next 2 games."

TFC has federal government permission to play next 2 home games in Toronto. American MLS teams may only bring fully vaxed players to Canada.
Expect announcement Friday re which players are eligible to cross border.
Gov't has made no decision on approvsls beyond next 2 games.

Major League Soccer explained that the Vancouver Whitecaps would remain in the United States for now.

"During this temporary window, Vancouver Whitecaps FC will host their home matches on July 17 and July 20 at Rio Tinto Stadium as conversations continue with the Canadian government regarding the three Canadian teams hosting future home matches in Canada," Major League Soccer said in a statement.

Toronto will host Orlando City on Saturday and the New York Red Bulls next Wednesday at BMO Field while Montreal entertains FC Cincinnati on Saturday at Saputo Stadium.

"The importance of this return home for our team can't be overstated," TFC president Bill Manning said in a statement. "It has been a long, hard time on the road due to pandemic protocols and we have greatly missed the energy and support of our fans at BMO Field.

"Our return to Canada gave the team an incredible boost this week and we look forward to an emotional night at BMO Field with our fans on Saturday."

The league said Toronto and Montreal will follow local and regional guidelines regarding attendance.

“After all this time away, we are truly happy to finally be able to play at home," Montreal president and CEO Kevin Gilmore said in a statement. "The past few months have been very difficult for our players and staff, who had to go into exile, but they have shown tremendous resilience.

"Our supporters have also been remarkably patient throughout this period, and we can't wait to see them at Stade Saputo on Saturday … We hope this is one more step in the right direction towards a full return."

Montreal (5-3-4) and Toronto (2-8-2) both returned home last week in the wake of the federal government loosening pandemic-related border restrictions for full vaccinated travellers. The Whitecaps (2-7-3) remain in their temporary U.S. home.

The Whitecaps will host the L.A. Galaxy on Saturday and the Houston Dynamo next Tuesday at Rio Tinto Stadium in Utah. Vancouver lists Sandy, Utah, as the site for its home games in July. It plays its first three games in August on the road before a scheduled home match Aug. 21 against Los Angeles FC.

Clubs and match officials travelling to Canada will be subject to public health protocols required of all individuals entering the country, the league said. Only fully vaccinated players and staff will be excluded from Canadian quarantine requirements.

COVID-19 testing will take place prior to departure and upon arrival in Canada.

After the two upcoming games at BMO Field, Toronto visits Chicago on July 24 before a home game Aug. 1 against Nashville SC. The league announcement Wednesday does not cover the Aug. 1 game.

After hosting Cincinnati, Montreal visits New York City FC (at Red Bulls Arena), the New England Revolution and Inter Miami CF. Its next home game after that is Aug. 4 against Atlanta United.

Montreal last played at Saputo Stadium on Sept. 9, when it beat Toronto before 250 fans. Vancouver's last outing at B.C., Place Stadium was a 2-1 win over Montreal on Sept 16 with no fans in the stands.

Toronto has not played at BMO Field since Sept. 1 when no fans were allowed. It has played the 31 games since on the road, finishing out last season in East Hartford, Conn., and starting this year in Orlando.

The last time fans were allowed at BMO Field for a TFC game was March 7, 2020, the second game of the regular season.

"We just need to go back home. We need to be home. Sports shouldn’t be like that. No sports team should go through that,” Vancouver coach Marc Dos Santos told reporters in a virtual availability Wednesday.

“When we think about the reality of going back home, we still think about ‘Is it for real? Is this really going to happen? Is there going to be a setback?’ " he added. "So I don’t want to jinx anything. I just hope we go as soon as possible.”

Montreal shifted its base of operation to Harrison, N.Y., last year and Fort Lauderdale, Fla., this year. The Whitecaps set up shop in Portland and Utah, respectively.

The three Canadian teams have gone a combined 26-40-12 in regular-season and playoff play since leaving their home markets.

Montreal currently sits eighth overall in the league standings, while Vancouver is 25th and Toronto 27th and last.

Baseball's Blue Jays are also in return-to-play negotiations. The American League club started the season at its spring training home of Dunedin, Fla., before moving operations to Buffalo.

With files from Gemma Karstens-Smith in Vancouver

With files from TSN