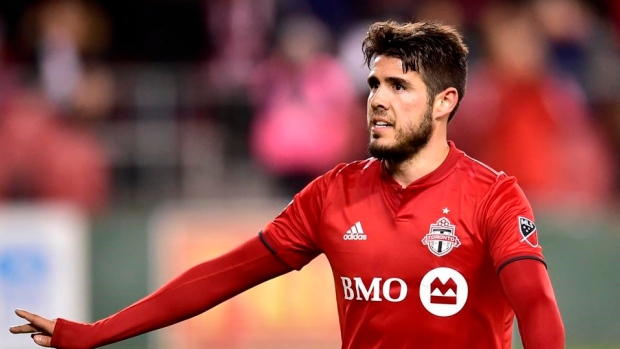 TORONTO — Captain Michael Bradley can appreciate why it may look like desperate times for his Toronto FC squad.

Toronto faces the Crew on Saturday in Columbus, where the Reds will be trying for a vital three points — especially after last week's 1-1 draw with visiting Orlando City put a cloud over their chances of making a return to the Major League Soccer post-season.

With nine games to go in the season TFC is level with Montreal Impact and Orlando at 33 points, but sit behind those teams in ninth place based on tiebreakers.

The top seven teams in each conference advance to the MLS playoffs. Toronto missed the post-season last year after winning the MLS Cup in 2017.

"We understand you get to this point of the year and the magnifying glass gets puts on us. We understand we need to be better," Bradley said after training on Thursday. "We feel good about the group that we have and we're excited about the opportunities that are going to be there for us as we move into the end of the season."

Bradley remains optimistic his team can put together a stretch of results that can separate Toronto FC from the playoff pack. He points to his team going through significant lineup changes, from losing star striker Sebastian Giovinco during the pre-season to injuries and call-ups as reasons for his team's shortcomings.

"We started the season without Jozy (Altidore) and (Alejandro) Pozuelo. Before that, you lose important guys from last year on the team late in pre-season. Then you get into a rhythm and lose a handful of guys for Gold Cup," Bradley said. "Sure it's easy to look at games and say we left points on the table, but's not always that simple or straightforward."

Just three of Toronto's nine remaining games are at home, making a good result in Columbus even more important.

"Our objective is to win the game, but we know we're on the road. We have to be smart, play together, and we'll approach it like every game," TFC manager Greg Vanney said. "But we understand the stakes continue to rise with each game that we have."

Columbus has also had its fair share of challenges.

After reaching the Eastern Conference semifinals last year, manager Gregg Berhalter departed to become head coach of the U.S. Men's National Team. Caleb Porter replaced Berhalter as Crew manager and has brought some changes into the style of play.

Despite sitting 11th in the Eastern Conference, Columbus has put together a season-best five-game unbeaten streak (2-0-3).

"I'm seeing the ideas and the things that Caleb preaches start to show in their play," TFC striker Patrick Mullins said. "They're showing the fruits of their labour and I expect it to be a difficult game."

Mullins, acquired by TFC from Columbus in a trade last month, has helped his team find some of its swagger it was missing. He scored the lone goal last week against Orlando and also had a goal on Wednesday in the team's 3-0 victory over Ottawa Fury FC in the second leg of the Canadian Championship semifinal.

Toronto also has midfielder Nick DeLeon back. He the other two goals against Ottawa after being out approximately 10 days with a hip/groin injury.

TFC has a fully healthy lineup at their disposal, leaving no excuses for what lies ahead.

"We have a lot of options, guys are playing well and there are some good competitions within the group," Vanney said. "There are challenges with it, but they're all positive challenges."

LATE GAME HEROICS — Columbus is coming off a 2-2 draw against FC Cincinnati in the first-ever Ohio derby. The Crew were down 2-0 at halftime and stormed back to salvage a result.

HEAD-TO-HEAD -—This is the first of two meetings between these teams. TFC last defeated the Crew on Nov. 29, 2017, a 1-0 win at BMO Field. Both teams meet in each other's season finale on Oct. 6. at BMO Field.

GALLARDO FACTOR — The newest member of TFC, Erickson Gallardo, made his debut for the team in their 3-0 win over Ottawa on Wednesday. The transfer from Venezuelan club FC Zamora impressed Vanney and could see time against Columbus.