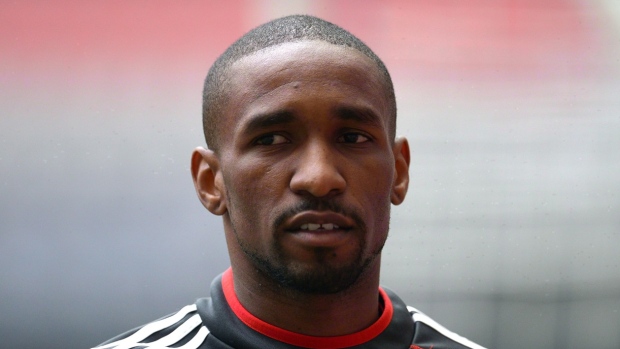 TORONTO - Toronto FC continues to field calls on Jermain Defoe but, barring the right offer, expects the English striker to report back for duty Jan. 17.

A string of English Premier League teams, most in the lower end of the standings, has been linked to the 32-year-old forward but most have seemingly balked at the cost given his wages and transfer fee. Toronto appears willing to sell him at the right price but is not interested in a loan.

TSN Soccer Analyst Luke Wileman is reporting that Defoe is training with his old club, Tottenham Hotspur, and will continue training for at least the next week following off-season groin surgery.

"It's expensive to get a reliable striker who has experience," he said in an interview Thursday. "Jermain, for me, when there's a dearth of talent out there, in the January transfer window there's few players that have the pedigree that Jermain has.

"So it doesn't surprise me that they are after him. But there's a market value for every player. Should someone come with an offer, then obviously we'd have to entertain it but right now teams are trying to be clever and of course they're going to say what they're going to say to try to get the best deal for themselves. But we're not buying."

Toronto, it appears, will have no issue with keeping a healthy, motivated Defoe.

"Jermain, when he wants to play, we think he's a top-three player in the league," Bezbatchenko said.

Noting the addition of assistant coach Robin Fraser, who worked with Thierry Henry and Tim Cahill at the New York Red Bulls, Bezbatchenko said "we're creating an environment that someone like Jermain, I think, can thrive in."

The English transfer window closes at the end of the month.

Toronto has given permission to Defoe, returning from a groin injury, to train with his former club Tottenham. The one-week training period began Thursday.

"The club can confirm that Jermain Defoe will train with our development squad for the next week in order to maintain his fitness during the MLS close season," Spurs said Thursday on its website.

"As of now we look forward to having him here the 17th. Nothing else has changed on any of that side," Vanney told reporters Thursday.

Vanney was also not surprised by the interest in Defoe.

"He's a good striker and everybody is looking at him. But right now he's with us and we expect right now that's he's back. Because nothing's been changed in any of the discussions that have been had."

Defoe scored 11 goals in 16 league games for Toronto in an injury-interrupted debut MLS season in 2014.

"Just touched down in the UK from south of France, was training with my fitness guy feeling stronger than ever! #Ready," Defoe tweeted earlier in the week.

His future in Toronto has been up in the air since the MLS club turned down a franchise-record transfer offer at the end of the summer transfer window.

Defoe is expected back earlier than most other TFC players because of his injury rehab. The rest will arrive for medicals Jan. 24-25 with the first on-field session Jan. 26.

Should Defoe return as planned, Toronto will have a full complement of strikers with Brazil's Gilberto, Luke Moore, Robbie Findley, Bright Dike and Jordan Hamilton.

"We'll have to figure out what the best pairing is," said Vanney. "That's what it's going to come down to for me."

Vanney spoke highly of Findley's work ethic and suggested the eight-year veteran will come to camp with something to prove after a limited role last season with Real Salt Lake.

Gilberto, meanwhile, is looking to report in better shape this season than last, with Vanney saying the Brazilian DP got "an eye-opener" when he arrived last year unfit after a lengthy layoff.

"He knows that and he felt that was contributing factor to a slow start for him in getting goals," the coach said. "I do believe he'll show up a lot more motivated and he understands what the challenges are within the league now. He wants to be strong when he gets here."

Toronto is one of several MLS clubs said to be interested in U.S international forward Jozy Altidore, currently with Sunderland.

Vanney clarified the club's position somewhat Thursday, saying Toronto is interested in any marquee player returning to the league.

"Any time a big-time player is coming back to the league, we want to be in the discussion," he said. "There's a lot of mechanisms that have to go in place for a lot of those things to happen ... who knows where that ends up? We're going to be there if there's a discussion to be had. That would be said of any other player who comes back that can add to our roster and make us a better team."

With Altidore reportedly looking for designated player status, something would have to give on the Toronto roster with three DPs currently under contract.