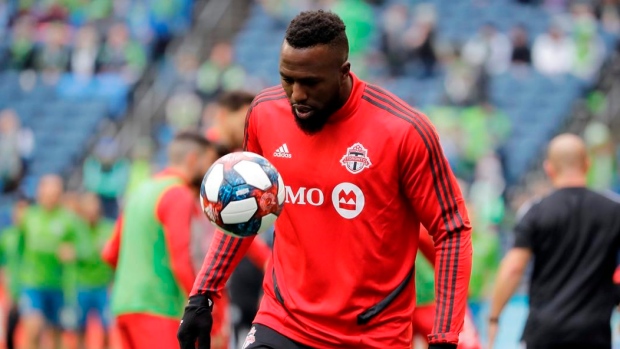 Toronto FC needs a win, not another injury or self-inflicted wound.

But this week's welcome news that Spanish playmaker Alejandro Pozuelo is expected to make his season debut Saturday at Columbus (2-2-2) has been overshadowed by news that the club's two other designated players have been sidelined for vastly different reasons.

Toronto (1-3-2) confirmed Friday that Venezuelan international winger Yeferson Sotledo has a hamstring injury. The hope is Soteldo won't be out longer than four to six weeks.

The prognosis for star striker Jozy Altidore is murkier. A source confirmed an ESPN report that the U.S. international has been told by the club to train on his own away from the first team.

Officially the club has only said it is an internal matter that is being handled in-house. Now based in Orlando, away from prying eyes, the team had probably hoped to keep to that way.

ESPN reported Thursday that Altidore had been told to train separately after confronting coach Chris Armas in the wake of being substituted in the 70th minute of last Saturday's 1-0 loss at Orlando City.

The source, granted anonymity because they were not authorized to speak publicly on the matter, said in fact the decision was made after several incidents.

Altidore is in his seventh season with Toronto, which signed him to a three-year contract extension in February 2019. He is due to make US$3.6 million this season, according to the MLS Players Association.

While the striker has spoken often about his affection for Toronto and its fans, he has butted heads with the club in the past. The two apparently have reached an impasse.

Toronto's woes grew Friday when the Venezuelan Football Federation, in a post on its official Twitter feed, revealed the injury to Soteldo, who has made four appearances since joining the team from Brazil's Santos FC on April 26 in a $6.5-million transfer.

GM Ali Curtis said the injury was only confirmed late Thursday afternoon, adding the club had not expected the Venezuelan federation to announce it.

It's been that kind of season for Toronto, which has taken steps forward only to stumble backwards.

Pozuelo, the league's reigning MVP, has been out since suffering a thigh injury in preseason. Toronto has won just two of 10 games (2-5-3) in all competitions without him this season. Armas says Pozuelo is healthy and will likely see some action, although he wouldn't predict how much.

Both teams have had a bumpy rise so far this season.

Armas says his side, which goes into weekend play 25th in the overall standings, has had "some really good moments."

"But in order to win in our league, we have to put it together for 90 minutes. And we haven't done that. … We have to execute in the moment of truth," he said.

Columbus coach Caleb Porter is also looking for improvements in the defending champions.

"The best teams, even more than ever, it comes down to execution," he said. "The best teams aren't changing a lot. They're just executing better than everybody else. So we want to get into a situation like last year where we're executing better. And I do think it's coming. We had another great week in training."

In looking at Toronto over the last couple of seasons, Armas says it can score and create "but there's also a team that has given up a lot of goals in a lot of different ways."

That includes this season, when Toronto's backline has been breached too often, including on set pieces. Armas has lamented "soft goals."

TFC is currently tied for 23rd in the league on defence, conceding 1.67 goals a game. It is tied for 15th on offence, scoring 1.17 goals per outing.

But it has struggled on offence this season, ranking tied for 23rd at scoring at 0.83 goals a game. The Crew have scored just five goals in six games, although four of those matches have been on the road.

Columbus star Lucas Zelarayan has accounted for three of those goals, all from direct free kicks. Two came in last Saturday's 2-1 win over New York City FC with the Argentine designated player notching the winner in the fifth minute of stoppage time.

Zelarayan is only the sixth player in MLS history to score two direct free-kick goals in a single game. He is the 12th player to score off three free kicks in a season (he also scored against D.C. United on May 8) and the first since Laurent Ciman, formerly of Toronto and Montreal, did it for Los Angeles FC in 2018.

"You know when he steps up something special's going to happen," Columbus goalkeeper Eloy Room said of Zelarayan.

Sebastian Giovinco has the league's single-season record with six direct free-kick goals in 2017 (the record book goes back to 2003 when Opta started keep track of the statistic). The former TFC star also stands No. 2 on the list with five in 2015. David Beckham ranks third, with four for the Los Angeles Galaxy in 2012.

In all, Zelarayan has nine goals in 21 regular-season appearances for Columbus, including four game-winners.

Toronto has enjoyed success against Columbus in recent times. It is undefeated in the past five contests (3-0-2) and has lost just twice in the last 12 league meetings (6-2-4).

"We're playing a very good team," Porter said. "They're having a little bit of an up-and-down run like us as well but they're a good team. They have very good players.

Still, the Crew hold a 9-4-6 all-time regular-season edge at home, outscoring Toronto FC 36-28 at Historic Crew Stadium. And Columbus is undefeated at home in 11 matches (9-0-2) in all competitions, a run that dates back to last October.

"We want to make those both wins, to close out that stadium on a positive," said Porter.

Their future home, currently dubbed New Crew Stadium, will open in July. It features 20,000 seats and a supporters' section that features standing room for 3,356.

Armas, who played more than 300 regular-season and playoff games over 12 seasons with the Los Angeles Galaxy and Chicago Fire from 1996 to 2007, has good and bad memories of playing in Columbus.

"On many nights I was being booed there as a player by their avid fans and supporters which was always cool," said Armas. "But on many other nights, I was with the U.S. national team being cheered on by maybe the same people."

Both sides have injury concerns.

Toronto forward Dom Dwyer is listed as out while centre back Omar Gonzalez (thigh) and midfielder Jonathan Osorio are listed as questionable, all with thigh injuries,

Saturday's game will feature sections for fully vaccinated fans. In partnership with Columbus Public Health, the Crew are providing COVID-19 vaccinations to supporters at the stadium, although that does not permit same-day entry into the vaccinated sections.

LAST TIME: Toronto won 2-0 on May 12 in Orlando, with both goals coming on set pieces.

TIES THAT BIND: Columbus president and GM Tim Bezbatchenko helped build the Toronto side that won the treble in 2017. Former Canadian international goalkeeper Pat Onstad is the Crew's technical director and vice-president of soccer operations. Jaime McMillan (V-P of soccer administrations and operations) and Corey Wray (assistant GM) are also in the Columbus front office. Canadian midfielder Liam Fraser is on loan from TFC to Columbus, but is ineligible to play Saturday. Centre back Josh Williams also played for TFC.