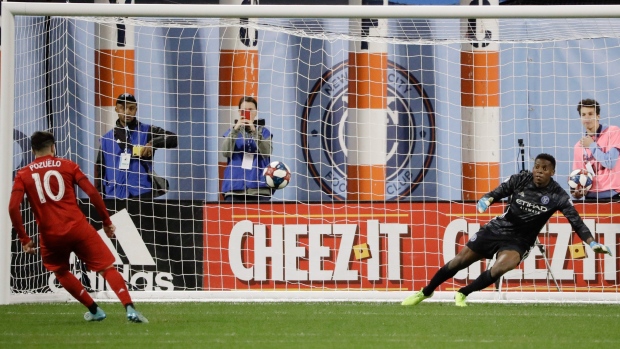 Alejandro Pozuelo knows all about suffering from the spot.

As a young Spaniard obsessed with the game, he grew up hearing about the June 22 penalty jinx.

Prior to 2008, Spain had lost all three of their shootouts at major tournaments on that date, all at the quarter-final stage, falling to Belgium at the 1986 World Cup, England at the 1996 European Championships and South Korea at the 2002 World Cup.

All of that changed for Spain at the quarter-finals of Euro 2008 in Vienna. One kick from 21-year-old Cesc Fabregas finally secured them a victory in a penalty shootout, defeating Italy for the first time ever in 88 years of trying.

That goal from Fabregas – remarkably again on June 22 – remains one of the crucial moments of modern-day football history. Spain had carried around the scars of past shootouts and games against Italy, but with one kick both burdens disappeared. With that pressure removed, they went on to win three straight major championships, not only transforming the game but also the way Spanish players were viewed. Gone were the bottlers of the past, replaced by technical and mental geniuses.

Pozuelo was between the ages of 16 and 20 when his country won back-to-back European Championships and a World Cup. The culture created by his nation’s top stars was contagious at all levels, including at Real Betis, where he would progress from the youth team to the first team during that era, looking up to stars on the national team.

Four years on from the victory in Vienna, Spain faced Portugal in the semifinal of the 2012 European Championships. Two months earlier, Sergio Ramos had missed a vital penalty in a UEFA Champions League semifinal for Real Madrid against Bayern Munich. Social media exploded that day with memes of his skied penalty.

The defender was less than impressed and told family members: “Next penalty I take will be a Panenka. That will shut them up.”

Antonin Panenka is a rare footballer who has a move named after him. In the 1976 European Championships his Czechoslovakia side drew 2-2 in the final against West Germany. For the first time ever, a major tournament would be decided by a shootout. Remarkably, it was a decision UEFA only agreed to on the day of the game.

Panenka loved penalties. He practised them in training regularly against a teammate in goal with the winner getting chocolate bars. He would lie awake at night wondering how to perfect his technique and decided on one with a quick run up and a chip down the middle of the goal, anticipating movement from the goalkeeper. He worked on it in friendly games and eventually in league matches before getting his chance as the fifth taker in that 1976 shootout with his team ahead 4-3.

The Panenka was born on June 20 1976 in Belgrade as the ball sailed into the air and delicately into the middle of the goal.

An original forever honoured with duplicates.

Ramos prepared for the Panenka in the buildup to the Portugal match, but inside the team’s Gniewino training facility in Poland he was so paranoid people were watching that he never practised it as a penalty. He instead continued to quietly work on the technique, making sure his toes touched the ball at the right angle and speed, without any outsiders suspecting.

At 2-2 after three kicks each in the shootout it was his time and Ramos delivered a precise Panenka past a diving Rui Patricio. The building shook, the momentum swung, Bruno Alves missed Portugal’s fourth and Spain won when Fabregas (again) scored their fifth penalty.

It was the second time in a week that a Panenka had become a game-changing moment. Three days earlier, Italian midfielder Andrea Pirlo was making the walk from the centre circle to the penalty spot to face England’s Joe Hart. It had been a walk he had taken in the 2006 World Cup final and one he once described as “an endless and terrible walk into one’s fears.”

Pirlo’s description of what he felt before he hit the 2006 penalty in his autobiography I Think Therefore I Play is remarkable. He describes in detail how only in that moment of intense pressure did it hit him just how great it was to be Italian.

“Looking back, I can say that the tepid shiver I felt before scoring was by the far the truest feeling I’ve ever felt in my life.”

Pirlo watched the England goalkeeper moving a lot before he stepped up to take it. He ran up to the ball on the spot and decided in the moment to do a Panenka, or as the Italian’s call it, cucchiaio (the spoon). Once again, the Panenka felt like more than just one penalty in a shootout. England missed the next, never recovered and the Italians progressed.

Panenka admitted it’s possible that scoring a goal in the magnitude can make a difference in a shootout. “It is possible that it can play tricks in the mind of the guy who has to take on the next kick. It could distract their concentration. It’s all in the mind,” he told Ben Lyttleton for his excellent book, Twelve Yards: The Art & Psychology of the Perfect Penalty.

Panenka, now 70, admits he smiles when he sees his move copied. Ramos has since scored a few more Panenkas, gaining admiration from the original himself.

“I do think that he can be my best ‘impersonator,’ the one who takes the best Panenka penalties out there,” Panenka said in 2018. “The most impressive part is that he has already done it several times and the people know he can do it again, and yet he still manages to pull it off. It’s a work of genius.”

Panenka is talking about Ramos but his admiration for someone who continues to score goals that way is clear and timely when you consider the success of Toronto FC’s Pozuelo.

The Spaniard’s latest Panenka in the 90th minute of a playoff game in New York City to win 2-1 means he has now scored six of seven penalties from the spot for his club since arriving in March. He’s also three for three with a Panenka.

None have come in a shootout, but all three have been meticulously planned and had a defining impact on the game. After he scored with his first attempt against New York City FC in March he told TSN: “I decided to do this last night as no one expected I would do this in my first game.”

He repeated it later in the season in a game against Colorado Rapids that came after he took two more penalties (scoring one) against New York City FC that weren’t Panenkas. In between, he also scored brilliant penalties against Brad Guzan of Atlanta United and Luis Robles of New York Red Bulls where the goalkeepers barely moved from the spot because his technique looked like he was going to place it down the middle again, before calmly slotting it into the corner

The second Panenka against Colorado planted the seed for the next one as the Spaniard guessed correctly on Wednesday night that goalkeeper Sean Johnson wouldn’t expect him to hit a third one, particularly in the final minute of a tied playoff game.

Pozuelo’s precise planning and love of penalties has put Toronto FC into the Eastern Conference final. Like his countrymen back in 2008, he has embraced the challenge of a one-on-one standoff between him and a goalkeeper. He has used the Panenka not as a way of showboating but based purely on calculation, believing in that moment it is in fact the least dangerous thing he could do – even though so many watching think the opposite.

It still takes remarkable skill and audacity to pull it off. No one has described it better than Roma legend Francesco Totti who said after scoring one at Euro 2000: “To take a penalty like that you must be crazy or very good and I don’t think I’m crazy.”

No one in Toronto believes Pozuelo is crazy either.