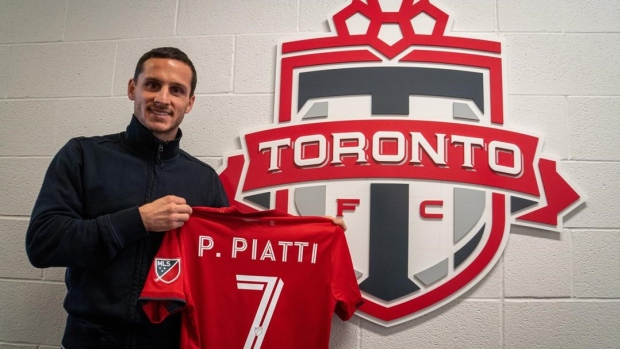 A club spokesman said the 30-year-old Piatti suffered the injury at training camp in Irvine, Calif. He has since returned to Toronto where an MRI showed the hamstring strain.

There was no immediate timetable for his return, with the spokesman saying the early prognosis was Piatti would be out a few weeks.

The Argentine has played just seven games since undergoing anterior cruciate ligament surgery last February while with Spain's Espanyol. He has not seen action in Toronto's pre-season schedule, which wrapped up Saturday with a weather-affected game against the Colorado Rapids.

The game at Dignity Health Sports Park was called at 1-1 at halftime due to inclement weather.

A hailstorm forced a temporary halt to the game in the 13th minute. There was another weather delay at halftime, this time because of lightning, which eventually prompted officials to call the game.

Star striker Jozy Altidore sat out Saturday's contest after tweaking his hip. The club said it was a precautionary move, adding the injury was nothing serious.

Toronto will remain in California in advance of its season opener Feb. 29 at the San Jose Earthquakes. Colorado opens the same day at D.C. United.

Endoh scored in the first minute for Toronto. Andre Shinyashiki replied in the third for Colorado on an assist from Nicolas Mezquida after a Canadian miscue. Shinyashiki, a Brazilian, was rookie of the year in the league in 2019.

The game started with a bang.

Pozuelo beat defender Keegan Rosenberry and then squared the ball to Mullins, whose diagonal ball found an onrushing Endoh in the penalty box. Endoh finished the play by sliding the ball under goalkeeper Clint Irwin.

Colorado struck back quickly through Shinyashiki, last season's rookie of the year.

When the players returned to the field after the weather delay, Toronto midfielder Marky Delgado was put in alone in the 23rd minute by Endoh but his attempted chip did not find the goal.