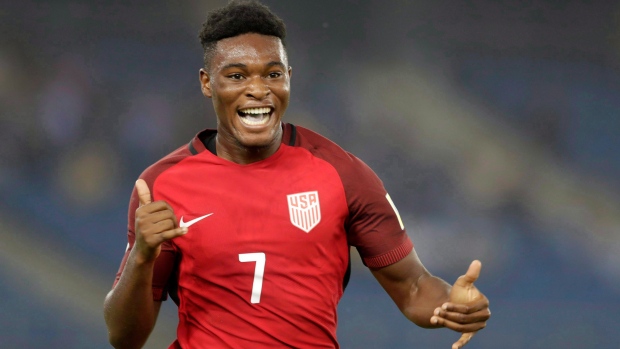 Toronto FC striker Ayo Akinola will get a chance to see how the other half lives next month at a Canadian national team camp in Florida.

The 20-year-old Akinola, who was born in Detroit but moved to Canada when he was one, is eligible to play for Canada, the U.S. and Nigeria. He made his debut for the U.S. senior side earlier this month, scoring in a 6-0 win over El Salvador, but was not cap-tied since the match was a friendly.

Akinola, whose Canadian-born younger brother Tom has featured in the Canadian youth setup, has come up through the U.S. ranks and played at the 2017 FIFA U-17 World Cup in India.

Canada Soccer has stayed in touch with Akinola, who turned heads with five goals in two games at the MLS is Back Tournament in July. He finished with nine goals in 15 MLS games this season.

"He's got big decisions to make. We're very respectful of that," said Canada coach John Herdman. "The one thing he has wanted is that opportunity to experience Canada. There are some big pros and cons for the decision both ways, whether it's the U.S. or Canada.

"We've had a lot of conversations over the last seven, eight months and he's kept his word to come in with us," he added. "We'll just be ourselves and show him what Canada has to offer."

Akinola still has time to ponder his international future. But the clock is ticking with World Cup qualifying and the CONCACAF Gold Cup looming in 2021.

The 28-player Canadian camp is slated to run Jan. 9 to 24 in a bubble at the IMG Center in Bradenton, Fla, where the WNBA returned to action. It will include two training scrimmages against as-yet-unannounced opposition as well as a Canada intra-squad scrimmage.

Marcelo Flores is another talent with international options invited to the camp. The 17-year-old Canadian-born forward, who is in the Arsenal setup, has already featured in the Mexican youth program thanks to his father's bloodlines. Canada Soccer would like to claim him.

Two other camp invitees have already opted for Canada.

Theo Corbeanu, an 18-year-old from Hamilton, has switched allegiance from Romania to Canada. He made the bench Monday for Wolves' 2-1 loss at Burnley in English Premier League action.

Frank Sturing, a 23-year-old defender from the Netherlands who is eligible for Canada through his parent's bloodlines, has also declared for Canada. A centre back currently playing for FC Den Bosch in the Dutch second division, he was part of the larger Canadian squad for the postponed CONCACAF Olympic Qualifying Championship.

"There's been some good work done behind the scenes during this period," said Herdman, referencing the players choosing Canada.

Herdman has a lot to do in a short time, with CONCACAF World Cup and Olympic qualifying set to start in March and the Gold Cup in July. And he knows things could change quickly given the pandemic.

The January camp falls outside of the FIFA international calendar, so Herdman has elected to focus on players out of season in North America and Europe. Twenty-two of the 28 players are from Major League Soccer, including seven from Toronto FC, six from the Montreal Impact and four from the Vancouver Whitecaps.

The Canadian men, currently ranked 72nd in the world, have not played since Jan. 15 when they lost 1-0 to Iceland in Irvine, Calif. That friendly followed a camp in California and a pair of 4-1 wins over Barbados on Jan. 7 and 10.

The pandemic subsequently grounded the Canadian program. A men's camp planned for November in Europe was called off on the advice of medical experts.

Herdman knows COVID-19 could still affect the January camp. Two invitees — Flores and Corbeanu — are with English clubs with travel to and from Britain complicated by the discovery of a new strain of the virus there.

Akinola, Corbeanu, Flores, Sturing and Waterman are among 11 newcomers to the senior squad. The others are Cristian Gutierrez of the Whitecaps, Dayne St. Clair of Minnesota United, Alistair Johnston of Nashville SC, Tajon Buchanan of New England Revolution, Ralph Priso of Toronto FC and Belal Halbouni of Germany's SV Werder Bremen.

Gutierrez, who was born in Quebec but moved to Chile when he was three, represented Chile at youth level but is in the process of changing his international allegiance.

Buchanan, Johnston and St. Clair all turned heads in MLS this season while Priso looked older than his years in brief appearances for Toronto.

There are 18 players born in 1997 or later, making them eligible for the rescheduled CONCACAF Olympic Qualifying Championship.

Canada is scheduled to finally open its 2022 World Cup qualifying campaign March 25 at home to Bermuda, the first of a possible 20 matches if the Canadian men are to book their ticket to Qatar.

After opening Group B play against No. 169 Bermuda, the Canadians play March 28 at the 193rd-ranked Cayman Islands and June 5 at No. 200 Aruba before wrapping up first-round play June 8 at home to No. 141 Suriname.

This report by The Canadian Press was first published Dec. 23, 2020