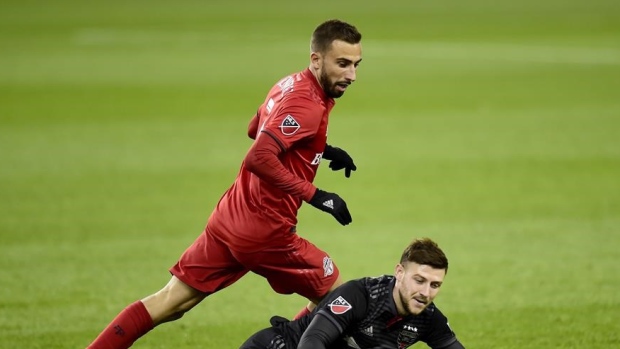 Toronto FC has shipped the rights to French winger Nicolas Benezet to the Colorado Rapids in exchange for US$50,000 general allocation money.

Toronto could get another $50,000 in GAM depending on performance.

Toronto signed Benezet, a former France under-20 player, on loan in late July after his Guingamp team was relegated to the French second tier.

The 28-year-old winger started 12 games for Toronto in the regular season and playoffs, scoring the tying goal in TFC's 2-1 comeback win in Atlanta in the Eastern Conference final.

Toronto subsequently did not exercise an option to make the loan deal permanent, with team president Bill Manning says it would be difficult to fit the Frenchman under the salary cap.

Benezet's 2019 salary was listed at $600,000, although he would have received a pro-rated amount given his late arrival.

Benezet campaigned on social media to return to Toronto, but to no avail. The move to Colorado reunites him with Robin Fraser, a former Toronto assistant now in charge of the Rapids.

The French winger started with the youth academy of his native Montpellier before joining Nimes in 2010. He moved to Evian in 2013 with a loan spell at Caen before signing with Guingamp in July 2015.