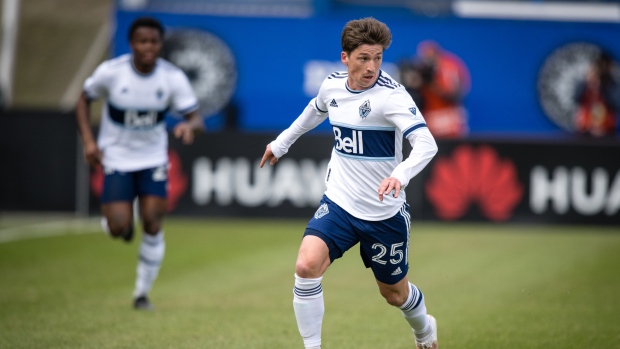 Vancouver (1-6-1) has lost three straight and languishes in the league basement with the fewest points it has ever had at this stage of an MLS season. Toronto (3-5-2) has also lost its last three, hasn't won on the road in 13 outings and arrives with a long list of missing players.

Something has to give.

The Whitecaps have had time to prepare for the all-Canadian matchup, given they have been off since a 3-0 loss in Austin on April 23.

"I think the break came at an ideal time for us to reassess, regroup, re-evaluate and to re-energize," said Vancouver veteran Russell Teibert.

"We're ready," he added. "The energy's been good around the (training) facility. The environment is very good right now. But all that being said, we need to translate it into the game on the weekend because it's a massive game for us."

In contrast, Toronto spent the week on the move. It lost 2-1 to visiting Cincinnati last Saturday and travelled to and from Cincinnati for a 2-0 loss in a midweek rematch before flying west — an itinerary that stretches some 4,000 kilometres.

And Toronto arrives with a thin roster.

Star Mexican defender Carlos Salcedo and Ifunanyachi Achara are in health and safety protocols while Chris Mavinga, Jonathan Orosio, Jahkeele Marshall-Rutty and Noble Okello are out injured. Wingback Jacob Shaffelburg is listed as questionable while midfielder Ralph Priso is suspended after his red card in Cincinnati.

"It's true they have injuries, they have some problems but they still have a lot of quality players like (Jesus) Jimenez, (Alejandro) Pozuelo (Michael) Bradley. Those are players that in any moment can invent something," said Whitecaps coach Vanni Sartini. "So what we need to do is be very focused when we don't have the ball. We need to be compact, we need to be very good defensively, because that we know if we limit them then we're going to have the chance to score when we have the ball. But it's not going to easy for sure."

The Toronto injuries have come in a congested part of the schedule,

"Luckily you don't have this every week but there are moments in seasons where games crash together and if it coincides with other factors, then yeah, you scramble a little bit," said Toronto coach Bob Bradley. "I think the challenge always is to find a steady way to keep everybody going."

TFC captain Michael Bradley, Bob's son, called it "a difficult stretch for a lot of reasons."

"But you know over the course of a season that everyone has to be able to deal with periods like this. No one's feeling sorry for themselves," he added. "We still look around and feel like we have a lot of good players, that we have guys who are ready for opportunities. No one's sitting around worrying about who's here, who's not here, about how things have gone."

Vancouver is without Caio Alexandre, Tristan Blackmon, Cristian Gutierrez and Leonard Owusu. But Scottish star midfielder Ryan Gauld returned to training after missing the Austin game with his second concussion of the season.

Sartini says the bye week helped dispel the hangover of the Austin loss.

"The mood was very down the first days after Austin — bad performance, bad result," said the Italian.

Sunday's game is the first of four straight at home for the Whitecaps, who are 1-1-1 at B.C. Place Stadium and 0-5-0 on the road this season.

"It's without question that we're kind of a different team at home," said Sartini. "We're more secure, more confident. We look more like a playoff team, like the team we want to be."

Toronto, which is 0-3-2 on the road this season, hasn't won away from home in 13 league games — since a 2-1 decision in Chicago on July 24. TFC is one way from tying its franchise-worst road winless run, a 14-game stretch from March to August 2011.

Toronto has not kept a clean sheet this season and hasn't blanked the opposition in 18 league games, since a 0-0 draw in Colorado on Sept. 25.

Defence has been a problem for both teams.

Antonoglou signed a homegrown contract to become part of the first team The other three agreed to short-term loan agreements,

In other Toronto news, TFC II has signed goalkeeper Baj Maan. The 21-year-old from Brampton, Ont, most recently played for Forge FC in the Canadian Premier League, where he had three shutouts in seven appearances across the 2020 and '21 seasons. Maan, a graduate of the Sigma FC academy, played collegiate soccer at Northern Kentucky University.

This report by The Canadian Press was first published May 7, 2022