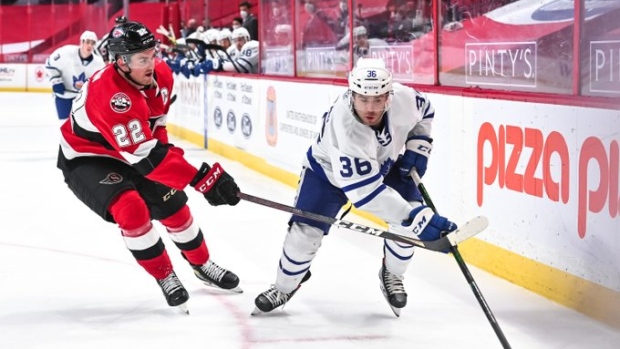 OTTAWA — Gordie Green scored his first American Hockey League goal and Kalle Kossila had three assists as the Toronto Marlies ended their season with a 6-3 win over the Belleville Senators on Thursday.

Jeremy McKenna had a goal and an assist for the Marlies, who finished the season fourth in the five-team Canadian division at 16-17-2.

Cole Cassels and Parker Kelly had a goal and an assist each and Cody Goloubef also scored for the Senators, who had an eight-game winning streak ended and finished third in the division at 18-16-1.

Veini Vehviläinen made 36 saves for Toronto, while Kevin Mandolese stopped 21 shots for the Senators.

The Laval Rocket finished first in the Canadian Division at 23-9-4. The teams will not be participating in a post-season due to restrictions around the COVID-19 pandemic.