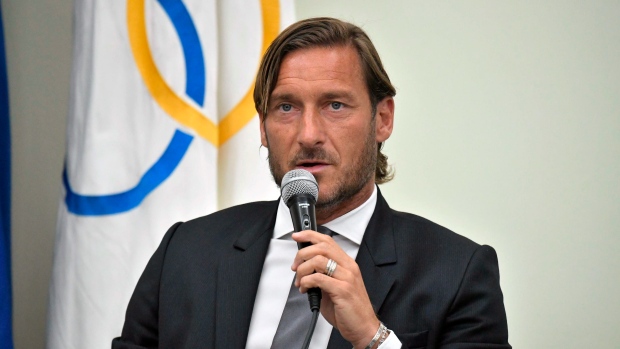 ROME — Former Roma captain Francesco Totti left his position within the club's management on Monday in a move that will increase fan opposition to the team's American owner.

While he has been a technical director since retiring from playing two years ago, Totti said he was left out of decisions about the hiring and firing of coaches and moves in the player transfer market.

"I never had the chance to express myself. They never involved me," Totti said. "The first year that can happen but by the second (year) I understood what they wanted to do. ... They knew of my desire to offer a lot to this squad but they never wanted it. They kept me out of everything.

"It's a day that I hoped never would have come," Totti added in a news conference at the Italian Olympic Committee.

"While we understand how hard it must be for him to take this decision to leave AS Roma after 30 years, we believe that his perception of the facts and decisions made at the club are both fanciful and far from reality," the club said in a statement.

After playing 25 seasons with his hometown club and leading the club to its last Serie A title in 2001, the 42-year-old Totti remains Roma's most emblematic figure.

Totti's departure comes a month after then-captain Daniele De Rossi announced he, too, was leaving Roma after the club surprisingly decided not to renew his contract.

Totti said Romans were being pushed out of Roma since James Pallotta and some fellow Boston executives purchased the club in 2011 — becoming the first foreign majority owners in Serie A.

"For eight years here, since the Americans came, they've done everything they could to sweep us aside," Totti said.

Pallotta runs the club from Boston and has not been to Rome in more than a year, and Totti said that was problematic.

"When the boss isn't around everyone does whatever they feel like," Totti said. "That's the case anywhere."

Pallotta said last week in a long interview published on Roma's website that he had offered Totti the role of technical director.

"This is a very important role at the club, easily one of the most important and influential roles in our football operations, and the fact that we want him to take on the role says everything about what we think of Francesco," Pallotta said.

"I don't know what is being said and by whom, because I've given up reading most of the media, but I believe Francesco already has great influence on our decision making."

While Paulo Fonseca was hired from Shakhtar Donetsk last week as Roma's new coach, Totti deflected reports that he had preferred Gennaro Gattuso or Sinisa Mihajlovic for the job.

"The only coach I called was Antonio Conte," Totti said, referring to the new Inter Milan coach.

Roma is coming off one of its worst seasons in years, with a sixth-place finish in Serie A meaning it missed out on the lucrative Champions League. A year after reaching the semifinals, Roma was eliminated from the Champions League by Porto in the first knockout stage.

Roma has also been struggling to build a new stadium.

Pallotta first presented a plan for a new stadium in March 2014, saying that it would be ready for the 2016-17 season — yet construction has still not started because of a series of bureaucratic delays.

Asked what it would take for him to return to Roma, Totti replied: "First of all, different ownership."

Totti also confirmed long-held speculation that the club forced him to retire from playing before he wanted to, and added that he had a six-year contract within management.

"There were a lot of promises made," he said. "But in the end they weren't kept."