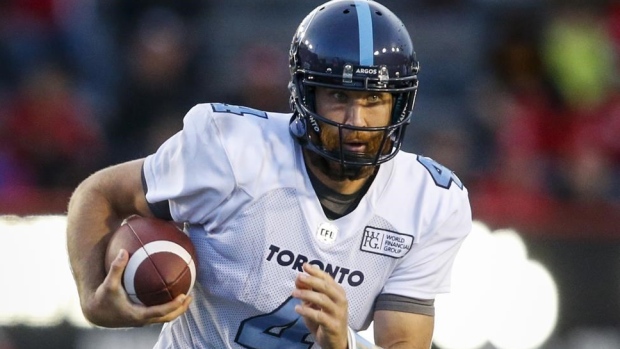 MONCTON, N.B. — The CFL makes its return to Atlantic Canada Sunday for the first time since 2013 with a key matchup featuring one of the league's marquis rivalries.

The Montreal Alouettes will face the Toronto Argonauts in a 1 p.m. Atlantic kickoff at Croix-Bleue Medavie Stadium, in Moncton, N.B.

It's the fourth time the New Brunswick city will host the regular season contest dubbed Touchdown Atlantic on the campus of the University of Moncton.

This year's game is sponsored by Schooners Sports and Entertainment (SSE), the business group trying to land a CFL franchise in Halifax. It's seen as a chance to showcase the league while gauging fan support in the Maritimes.

"I love it, I really do," said Alouettes head coach Khari Jones, who previously took part in a Touchdown Atlantic game with Hamilton as an assistant coach in 2011.

"It was great to see another part of Canada and to be a part of bringing the CFL out here."

Aside from the event hype, the game is shaping up as a crucial one for both clubs.

The Als enter the contest playing .500 ball with a 4-4 record after a thrilling 40-34 overtime win in Calgary last week, and the East Division's second-place team will want to continue its momentum to keep pace with East-leading Hamilton.

The team has won four of its last six games and will be led by quarterback Vernon Adams, who will be at the helm for the second week in a row.

The Argos, meanwhile, just need a win. Toronto's chance of getting back in the playoff race is fast slipping away as the season hits the halfway mark.

They are coming off a loss last week at the hands of Edmonton 41-26 after surprisingly picking up their first win of the season the previous week against West-leading Winnipeg.

Jones said he wants his team to focus on its opponent and doesn't see the matchup as a so-called trap game because of Toronto's woeful 1-7 record.

"We don't really worry about their record," he said. "They've played some tight games and lost them but they've beaten a very good Winnipeg team. If we win or if we lose it will just be us playing and it won't be a thing where I feel like we had a letdown because of who we are playing."

Toronto head coach Corey Chamblin was succinct when asked what his team needed to do.

"Win," he chuckled. "I've seen a lot of growth and improvement in our football team. We've gotten a lot better in different areas. Now it's time to put it all together and be better in the second half of the season."

McLeod Bethel-Thompson will get the start at quarterback for the Argos, although Chamblin said he also expects to use James Franklin at the pivot spot.

Veteran Toronto receiver S.J. Green, who needs just 49 yards to move up to number 23 among the league's all-time receiving leaders, believes the team is close to turning things around, but stresses things have to change soon.

"I feel like we have been in games this year where we've allowed ourselves to lose the game as opposed to taking opportunities to win it. I do feel like we're close but close doesn't do us anything unless it's a win"

The Argos will have to contend with Montreal's league-leading ground attack, which is expected to get a boost with the return of running back William Stanback, who missed two games due to injury.

The Als average 143.6 yards per game on the ground and Stanback currently sits third in league rushing.

He said he won't be starting, but is feeling healthy and he expects to see action.

Stanback said a big key to his success in rushing the football this season has been the offensive line. He said it's an important collaboration.

"They've been working their butts off every week, just going hard," he said. "We just make sure we do what we have to do to go out and perform."

ONE MAN TEAM — Montreal Quarterback Vernon Adams accounted for 445 of Montreal's 556 net yards last week against Calgary (80 per cent, 407 passing and 38 rushing). The Als output in Calgary was their largest since July, 2010, when they ran up 561 yards against the Argos.

BOMBS AWAY — Toronto Quarterback McLeod Bethel-Thompson has thrown for 300 plus yards in four of his last six starts and has a current streak of 89 consecutive pass attempts without an interception.

STELLAR DEFENDERS — Veteran Montreal defensive end John Bowman has 128 career sacks (three behind Vince Goldsmith who is in the number six spot all-time with 131). Toronto linebacker Micah Awe enters the Moncton game on a roll. He has 20 tackles, a sack and three pass knockdowns in his last three games.