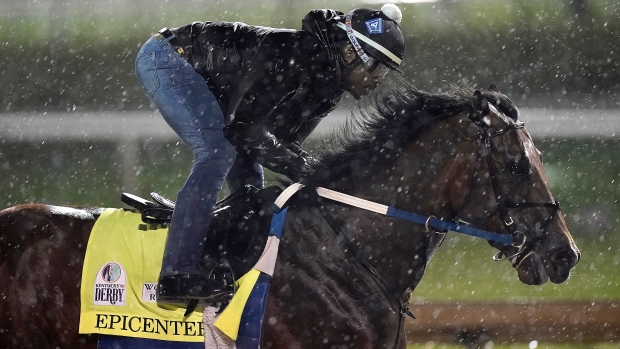 LOUISVILLE, Ky. (AP) — Steve Asmussen is caught off guard when asked about his achievements, mainly because he’s too focused on training horses to reflect.

And the fun he’s had doing so keeps him driven to attain more success.

Such as winning his first Kentucky Derby to add to a resume that includes Triple Crown victories in the Preakness (twice) and Belmont Stakes. Having seen a signature moment painfully slip away in the stretch at Churchill Downs in 2011, the 56-year-old smiled when reminiscing about the close call that keeps him motivated to chase racing’s signature jewel.

“I’ve said that I know what it feels like to think you’re going to win it while it’s running,” he said, recalling Nehro being within reach of leader Shackleford 11 years ago before Animal Kingdom overtook both in the stretch for the victory.

“When it was running, I didn’t pick up visually Animal Kingdom coming. Watching the race at the one-eighth pole, I thought he (Nehro) was about to win the Derby, you know? So, I’ve had unbelievably thrilling moments without the trophy.”

The New York State Gaming Commission fined Asmussen $10,000 in November 2015 for administering the hormone thyroxine to horses at Saratoga within 48 hours of racing, a violation of state regulations. His discipline followed an undercover probe and video by People for the Ethical Treatment of Animals that accused the trainer and workers of mistreating horses.

Other more serious abuse allegations against Asmussen lodged by the animal rights group were unfounded, the commission decided, before enacting drug rule changes. The trainer felt that outcome vindicated his care for horses.

“If anything, it proved that we follow the rules,” Asmussen said. “It erased any criticism of us going forward.”

The Texas-based trainer who was inducted into racing’s Hall of Fame in 2016 is optimistic about Epicenter’s Derby prospects this weekend, even as the 7-2 second choice behind favorite Zandon (3-1). The colt’s odds are due to his draw of the No. 3 post position — which has yielded just five winners since the starting gate was implemented in 1930 — that challenges the Derby trail points leader to break quickly to avoid being bunched in a pack before the first turn.

Asmussen points to Epicenter’s growth during impressive victories in the Risen Star Stakes and Louisiana Derby. Not to mention consistent training runs since arriving at Churchill Downs in mid-April. His unbeaten filly Echo Zulu is a 4-1 third choice in Friday’s Kentucky Oaks, positioning Asmussen for a potential sweep if everything falls right.

Even before the draw, Epicenter’s co-owner, Ron Winchell, said Winchell Thoroughbreds’ longtime trainer was leaving nothing up to chance.

“I’ve never seen a trainer that has an attention to detail that he has,” Winchell said, citing Asmussen familiarizing the horse with the 20-horse starting gate.

“You don’t want them to be there for the first time on Derby day looking around and seeing what’s new around them,” Winchell said. “Stuff like that is what makes Steve different, and there’s no stone left unturned with him.”

Four-time Derby-winning trainer D. Wayne Lukas added: “He is just too good a horseman to not get one. This year, I think he quietly feels like he’s got the best chance so far.”

No matter the outcome on Saturday, Asmussen simply will look forward to what the next race brings. That approach is why he recalls disappointments fondly and downplays the accolades, neither of which matter when there are more races to run.

“You have a bad week or a bad run or a bad month, you still get to line up even,” Asmussen said. “You win four or five in a row, you’re not going to get a head start.

“On this day, this moment, you prove it, and people talking about what’s going on has zero bearing. You’ve got to do it again.”