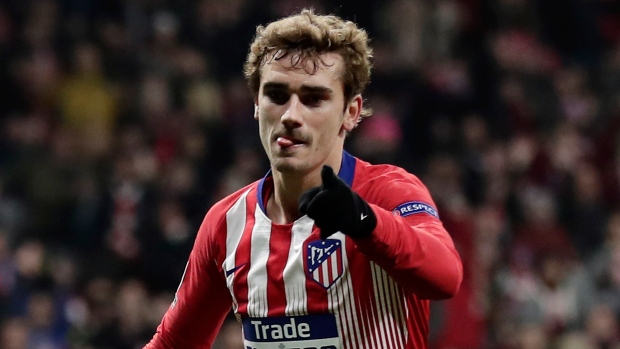 The European transfer window has slammed shut. Antoine Griezmann rejoined Atletico, Dan James signed for Leeds and Eduardo Camavinga made the switch to Real Madrid. Look back on what was a busy day across the football world.

THE WINDOW IS CLOSED

Serge Aurier is a free agent.

Aurier was in his fifth year with Spurs after a £23 million move from Paris Saint-Germain in 2017.

Despite the transfer window closing, Aurier remains free to sign with any team of his choosing.

One defender leaves the Emirates in Hector Bellerin and another arrives in the former of Takehiro Tomiyasu.

Fabrizio Romano reports Arsenal has completed the signing of the 22-year-old Japan international from Bologna.

A native of Fukuoka, Tomiyasu spent the past two seasons for the Serie A side, making 61 league appearances.

Tomiyasu has been capped 23 times by the Samurai Blue.

Hector Bellerin is back in Spain.

The Spain full-back has joined Real Betis on loan from Arsenal.

He made 183 league appearances for the Gunners over seven seasons and has won three FA Cups with the team.

Griezmann has agreement for two years contract plus one option. He’s BACK at Atléti. Shocking move of the day. pic.twitter.com/kBQAkgQyLt

Fabrizio Romano reports that Antoine Griezmann will, in fact, be headed back to Atletico on loan for the season with an option to buy at season's end. He's also agreed to a new contract for two years and an option year with Atletico.

No Kounde for Chelsea

Callum Hudson-Odoi stays at Chelsea and Jules Koundé is NOT joining Chelsea from Sevilla. Paperworks time for Saúl. 🔵 #CFC #DeadlineDay

The France defender will remain at Sevilla. Romano also notes that England winger Callum Hudson-Odoi will not be going out on loan and will stay at Stamford Bridge.

French football expert Julien Laurens wonders what Barcelona is thinking in handing Antoine Griezmann back to Atletico in a cut-price move.

"Griezmann was not happy at Barca but still, you are giving one of your direct opponents for the title and one of the other big clubs in Spain one of your best players arguably, a fantastic player and you don't get anything in exchange," Laurens said on BBC Radio 5 Live. "Apart from a loan with an option to buy. I don't know who makes those decisions but I find them crazy decisions. Incredible."

Last season, Barca allowed Luis Suarez to join Atletico on a free, believing the veteran Uruguay striker to be an expensive spent force. Suarez had the last laugh, though, with a 21-goal campaign as Atleti became La Liga champions.

The Czech contingent at West Ham has grown again as midfielder Alex Kral has joined the club from Spartak Moscow on loan.

Thought we’d leave this introduction to our #CzechMates… 🇨🇿🤝 pic.twitter.com/XJ8Y3iJqJs

International teammates Tomas Soucek and Vladimir Coufal made the announcement on Twitter.

The loan for the 23-year-old Kral has an option to make the move permanent.

While there was some talk in Spain about a possible late move to Barcelona, Edinson Cavani confirmed on Tuesday that he will remain with Manchester United.

Manager Ole Gunnar Solskjaer has made it clear that he considers the veteran Uruguay striker a key member of his squad.

Griezmann back to Atletico?

If this one were to happen, it would be a true deadline day blockbuster.

According to multiple reports, Antoine Griezmann could be set for a sensational return to Atletico.

Antoine Griezmann to Atletico Madrid is moving very fast - talks on over a €50m transfer, if Atletico can't agree to this, then Barcelona are willing to do a loan with option to buy that would see Atletico pay the fee next summer. pic.twitter.com/4Z3sHtkIPz

With Barcelona still cash-strapped even after the departure of Lionel Messi, Atletico could pounce on a cut-price move for their former talisman.

The 30-year-old France forward spent five seasons at Atletico before his 2019 move to Camp Nou. Griezmann scored 94 league goals in 180 appearances for Atleti and won the 2018 Europa League in his time with the club.

Earlier in the summer, there had been talk of a swap move between Barca and Atleti that would have seen Griezmann head back to the defending La Liga champions in exchange for Saul Niguez.

The deal is believed to be worth around £26 million.

The 22-year-old Emerson signed with Barca from Atletico Mineiro in 2018, but he spent the past three seasons on loan at Real Betis. Emerson saw his first action for Barca in the team's first three league matches this season.

Internationally, he's been capped four times by Brazil and appeared for the La Selecao at this past summer's Copa America.

Ampadu set for Serie A loan

The 20-year-old centre-back is joining promoted side Venezia on a year-long loan.

Having signed for Chelsea from Exeter City in 2017, Ampadu has found playing time at Stamford Bridge hard to come by under multiple managers. Ampadu has made just 12 appearances for Chelsea with only one coming in the Premier League.

Ampadu spent last season on loan with Sheffield United, making 25 league appearances as the Blades were relegated to the Championship.

Ademola Lookman is going back to England.

Leicester City announced the signing of the 23-year-old winger on loan from RB Leipzig. The London native and former England youth international spent last season on loan at Fulham.

A product of the Charlton Athletic academy, Lookman joined Leipzig from Everton in 2019.

There was also an outgoing move at the King Power on Tuesday, with Belgium midfielder Dennis Praet joining Torino on loan.

One of Europe's best young midfielders is headed to the Bernabeu.

Camavinga had been the subject of interest from a number of European heavyweights including Manchester United and Chelsea.

Fabrizio Romano reports the transfer fee is in the neighbourhood of €40 million. Camavinga, already capped three times by Les Bleus, has signed a six-year deal with Los Blancos taking him through 2027.

The World Cup winner will sign a two-year deal with the club.

A native of Berlin, Boateng heads to France on a free transfer following the expiration of his deal with Bayern Munich.

Internationally, Boateng has been capped 74 times by Die Mannschaft, winning the World Cup in 2014.

It doesn't appear that Nuno Mendes will be headed to the Premier League.

Fabrizio Romano reports that the Portugal left-back has agreed to personal terms with PSG as the club now attempts to iron out a transfer with Porto.

Reiss Nelson is on his way to the Eredivisie.

Arsenal announced on Tuesday that the 21-year-old winger is joining Feyenoord on loan.

This will be the England under-21's second loan spell away from the club. Nelson appeared in 23 Bundesliga matches for Hoffenheim during 2018-2019.

The London-born Nelson has made 23 league appearances for the Gunners over four seasons.

Manchester United have confirmed that Dan James is on his way to Leeds.

All the best for the future, @Daniel_James_97 🤝#MUFC

James finishes his United career with nine goals in 74 appearances across all competitions from 2019 to this past Sunday.

There had been talk all summer of Saul Niguez's exit from Atletico and a move to the Premier League, but nothing ever materialized.

Saul Niguez to Chelsea may happen https://t.co/9V12ng44cc via @BBCSport

Saul, 26, has been with Atleti since jumping to the team academy from Real Madrid in 2008. He's made 340 appearances for the reigning La Liga champions over 10 seasons with the senior side.

Manchester United had also been attached to Saul earlier in the window.

Mendes available for a late move?

Could Portugal left-back Nuno Mendes be on his way out of Sporting?

Sporting are open to sell Nuno Mendes in the next few hours. His agent Miguel Pinho has been in touch with Paris Saint-Germain and Manchester City in the last minutes. 🔴🇵🇹 #PSG #MCFC

Fabrizio Romano reports that the team is open to moving the 19-year-old defender in the final hours of the window with his agent speaking with both Manchester City and Paris Saint-Germain. The team will reportedly be seeking a transfer fee in the range of €40 million.

A product of the Sporting academy, Mendes signed a new deal with the club at the end of 2020 that increased his buyout clause to €70 million.

Sevilla not budging on Kounde?

Chelsea's sale of Kurt Zouma to West Ham over the weekend was expected to pave the way for the Blues to buy Zouma's France teammate Jules Kounde, but those plans have appeared to hit a snag.

Sevilla sporting director Monchi had a press conference earlier on Tuesday in which he called the team's offers for the 22-year-old defender "unsatisfactory."

"The only formal offer from Chelsea came last Wednesday," Monchi said. "We weren't satisfied with the offer, and it was linked to Chelsea selling a player. It was a decent fee but it didn't meet our criteria. "We haven't spoken with Chelsea since Friday night."

Monchi did concede, however, that Kounde was interested in the move to London.

The Wales winger has passed his medical and will be officially unveiled by the club later on Tuesday after his move from Manchester United.

Daniel James has also signed his contract with Leeds United to join the club on a permanent move from Manchester United. Done deal and confirmed. 🔴 #LUFC #MUFC

James had come close to signing for Leeds from Swansea City in 2019, but after the move collapsed, he signed for the Red Devils. With the arrivals of Cristiano Ronaldo and Jadon Sancho, he's become surplus to requirements at Old Trafford.

The deal for James is believed to have cost Leeds up to £30 million, which represents a tidy profit for the Red Devils. United paid £15 million for the player in his sale from the Swans.

No shirt number yet for Ronaldo

Cristiano Ronaldo was officially unveiled as a Manchester United player for the second time on Tuesday, but conspicuously absent from his presentation was his shirt number.

His famous No. 7 is currently held by Edinson Cavani and he's reportedly willing to give it up, but it will take special dispensation from the Premier League for that to happen. With Dan James moving to Leeds, the No. 21 is now open, which is the number Cavani wears for Uruguay.

Should Ronaldo be unable to take back No. 7, there is some thought that the 36-year-old Portugal captain could choose the No. 28, which was the shirt number he wore when he broke into the Sporting first team in 2002.