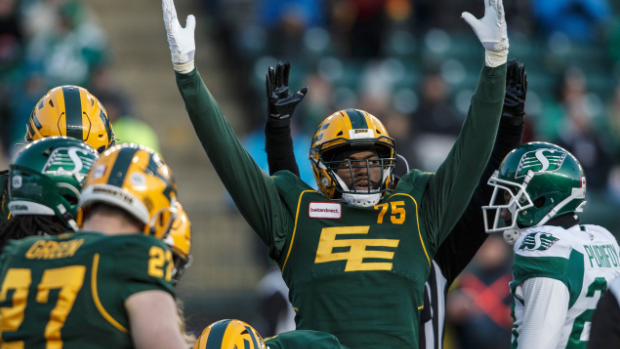 EDMONTON — The Edmonton Eskimos eviscerated the Montreal Alouettes through the air last week — but in Sunday's CFL East final against the league-leading Hamilton Tiger-Cats, the passing game may well be won in the trenches.

"It's going to be a bar fight," Eskimo offensive lineman Matt O'Donnell said after practice Wednesday.

"That (Hamilton) defence as a whole is one of the best in the league, especially their D-line. The linebackers are good, a lot of experience, a lot of veteran guys there and they play physical. That's what we love to see."

The Eskimos (8-10) look to become the first CFL crossover team to make it to the Grey Cup when they take on the 15-3 Ticats at Tim Hortons Field.

To do it, they need to ride the momentum of their offence and quarterback Trevor Harris.

Harris torched the Alouettes in the East semifinal by completing 92 per cent of his passes for 421 yards while, thanks to his line, Montreal defenders barely laid a mitt on him.

Harris did it with a medley of quick passes to a bevy of receivers on short to medium routes: swing passes, flat passes, sideline hits, curl routes, seam routes, slants, checkdowns and outlet tosses.

First and 10 often became second and short as the Eskimos ground down the Alouette defence with long, sustained drives en route to a 37-29 win.

That challenge gets ramped up tenfold this week facing a Hamilton team that allowed the fewest points in the regular season (344), scored the most (551), never lost at home and beat the Eskimos twice.

It's a marauding, swarming defence featuring linebacker Simoni Lawrence, who led the league with 98 tackles despite playing in just 15 games.

He is joined by Justin Tuggle, enjoying a career year with 80 tackles.

"They're one of the best front-sevens in our league. They've got guys that can terrorize the quarterback. They're big, they're physical, they move around, so they give you different looks," said Maas.

Harris has not played the Ticats this year because he missed a third of the season with a nagging injury on his throwing arm.

The last time he played Hamilton he made history. As the Ottawa Redblacks quarterback, he shredded the 'Cats in last year's East final, throwing a record six touchdown passes to go with a 91 per cent completion rate in a 46-27 win.

That was then, said Harris, who joined Edmonton in the off-season along with fellow Redblack receiver Greg Ellingson.

This report by The Canadian Press was first published Nov. 13, 2019.