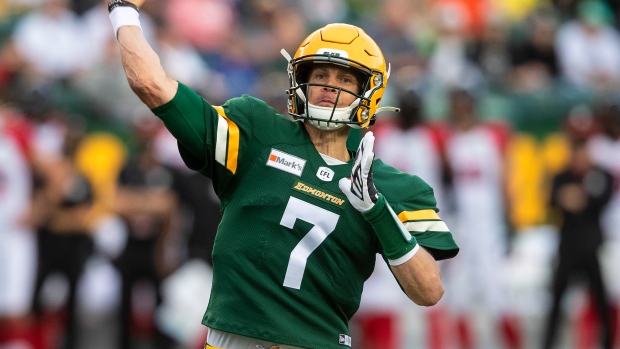 Montreal Alouettes head coach Khari Jones says newly-acquired quarterback Trevor Harris will quarantine this week and be available to practice with his new team next week.

#MontreALS Khari Jones says Trevor Harris will quarantine this week and be available to practise with his new team next week with the expectation of suiting up for his first game on October 30. #CFL

TSN's John Lu tweets the expectation is that Harris will suit up for his first game with the Alouettes on Oct. 30 against the Saskatchewan Roughriders.

Harris was acquired by the Als in a trade with the Edmonton Elks on Sunday with defensive end Antonio Simmons heading back west.

The veteran pivot did not dress for Edmonton's last game, with rookie Taylor Cornelius getting the start and Dakota Prukop serving as the backup last Friday against the Winnipeg Blue Bombers.

Meanwhile, the Alouettes recently announced that their starting quarterback, Vernon Adams Jr., will miss the rest of the season with a shoulder injury.

A veteran of nine CFL seasons, Harris has thrown for 1,568 yards and six touchdowns compared to five interceptions in six games for the Elks so far this season.

Before their matchup with the Riders on the 30th, Montreal will take on the Toronto Argonauts at Percival Molson Stadium Friday evening.