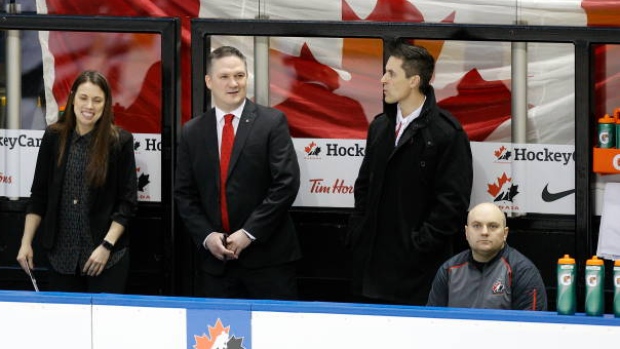 Canada’s women’s hockey team has been riding a coaching carousel for the past decade.

The team has had nine different head coaches since 2010, including five different faces behind the bench since Canada last won gold at the 2012 IIHF Women’s World Championship, led by Dan Church.

Troy Ryan is the current bench boss. He took over the role in January 2020 and is now charged with ending Canada’s nine-year gold-medal drought at next month’s 2021 IIHF Women’s World Championship in Calgary. All of Canada’s games can be seen live on TSN.

To understand how we got to this point, let’s take a closer look at Ryan and his four most recent predecessors, dating back to the last time Canada won gold at the world championship in 2012.

Dineen took over for Dan Church, who abruptly resigned as head coach late in 2013, less than two months before the 2014 Sochi Olympics.

Church had led Canada to gold at the 2012 IIHF Women’s World Championship, but at the time of his resignation, he said he felt there were doubts within Hockey Canada about his ability to lead the team to gold at the Olympics.

He told the Canadian Press, “If there isn’t confidence in what I’m doing, I need to step aside and let the team move on.”

The following week, Hockey Canada announced Dineen as Church’s successor. Dineen had recently been fired as head coach of the Florida Panthers after just over two seasons with the club. While he had international experience as a player, he had no previous coaching experience with the national team or in the women’s game.

It was an inauspicious start to Dineen’s tenure. He lost his coaching debut 4-1 to the United States in an exhibition match, which was followed by two more defeats to the Americans in a tune-up series before the Olympics.

Ahead of the tournament, Dineen named Caroline Ouellette as captain over Hayley Wickenheiser.

“There is a tremendous amount of experience in our dressing room, and there is no shortage of qualified candidates to wear a letter,” Dineen said in a statement.

Dineen led Canada to a perfect 3-0 record in the preliminary round in Sochi, including a 3-2 victory over the U.S. In the inevitable rematch between the rivals in the gold-medal game, the Americans led 2-0 with under four minutes left.

But two quick goals from Canada – including one from Marie-Phillip Poulin with under a minute to go – sent the game to overtime, where Poulin provided the heroics once again with the winner.

Dineen later revealed that Poulin’s golden goal – which came on a Canadian 4-on-3 power play – wasn’t the play he had originally drawn up.

“You know what? They got the puck on the right stick,” he said.

Dineen’s tenure ended as suddenly as it began. On March 20, Dineen left the women’s team after just over three months on the job to become the head coach of the Canadian men’s Under-18 team for the 2014 IIHF World U18 Championship, where the squad won bronze.

Derraugh took over in July 2014 for the start of a new Olympic four-year cycle. Derraugh was a former assistant with the women’s national team from 2011-2012, winning a gold medal with the team at the 2012 IIHF Women’s World Championship.

At the time of his hire, he had just completed his ninth season as head coach of Cornell University’s women’s hockey team, where he is the winningest coach in the program’s history. Derraugh is still behind the bench with the Big Red and has amassed a record of 295-152-45 and four Frozen Four appearances.

Derraugh brought a familiarity with the team and the women’s game that his predecessor lacked. He was already acquainted with several key players like Laura Fortino, Brianne Jenner, and Rebecca Johnston after coaching them at Cornell.

For the 2014 Four Nations Cup, Canada’s roster had 10 players who would make their debuts with the national team, including current mainstays like goaltender Emerance Maschmeyer and forward Blayre Turnbull. Canada would win their 14th title at the event, beating the U.S. 3-2 in a shootout to claim gold.

At the 2015 IIHF Women’s World Championship, Canada once again boasted a younger roster, which had an average age of just over 24. Ten players were making their women’s worlds debut. In a wild final against the United States, Canada ended up losing 7-5 in the highest-scoring gold-medal match in tournament history. The Canadians erased a pair of three-goal deficits but were ultimately outgunned by their rivals.

Derraugh left his role as head coach before the 2015 Four Nations Cup, but he has remained involved with the team throughout the years and is currently an assistant coach with the squad.

In their next hire, Hockey Canada made history with Schuler, the first former player on the national team to serve as head coach.

As a player, Schuler won three gold medals at the women’s worlds, including at the inaugural event in 1990, as well as silver at Nagano in 1998 when women’s hockey made its Olympic debut.

She had previously served as an assistant with the national team, as well as head coach of the women’s under-18 squad that won gold at the 2014 IIHF U18 Women’s World Championship. Schuler became the first woman to serve as head coach for Canada since Melody Davidson, the team’s former general manager, stepped down from her coaching duties in 2010.

But despite her pedigree as a player, Schuler never led Canada to gold at any major tournament as a head coach. Under Schuler, the Canadians won a combined five silver medals at the women’s worlds and Four Nations Cup and were also runners-up at the 2018 Olympics.

Schuler began her head coaching tenure with a silver medal at the 2015 Four Nations Cup, losing to the United States twice, including an overtime loss in the gold-medal game. That was followed by two more losses to the Americans at the 2016 IIHF Women’s World Championship in Kamloops, B.C. The gold-medal match was a close battle, but the U.S. edged Canada 1-0 in overtime to deny their rivals of gold on home ice for a second time in three years.

“I believe that we have the personnel to [win],” Schuler told TSN after the game. “They won the luck of the draw this time around… Next time, we’ll make sure we take care of it.”

But it was more of the same in 2017, with the U.S. once again defeating Canada in overtime to win 3-2 and claim women’s worlds gold on home ice for the first time in Plymouth, Mich. It was a discouraging run-up to the 2018 Olympics for Canada, who finished with just two wins in five games and lost to Finland for the first time ever in the preliminary round.

Despite the unprecedented loss, a Sports Illustrated report said Schuler “was adamant that there weren’t problems to fix.” Hockey Canada seemingly agreed and awarded Schuler with the coaching position for the 2018 Olympics, charging her with leading Canada to a fifth straight Olympic gold.

All signs seemed to point to Canada continuing its Olympic dominance. In an exhibition series against the United States before the Olympics, Canada won five of the six games. The five straight victories came after the Canadians dropped the opener 5-2, and Schuler called the game “an embarrassment to our country.”

At the PyeongChang Games, the Canadians continued to roll, beating the Americans 2-1 in the preliminary round, and in the gold-medal rematch, they were six minutes away from claiming another title. The Canadians led 2-1 late in the third period until Monique Lamoreux tied it on a breakaway, and her sister Jocelyn scored the winner in the shootout to give the Americans their first Olympic gold since 1998.

Canada’s run of Olympic gold came to an end, as did Schuler’s time as head coach.

Pearn, who was an assistant under Schuler at PyeongChang, took over as bench boss for the new Olympic cycle. He brought more than two decades of experience as an assistant coach in the NHL, as well as some international pedigree, leading Canada to gold at the 1993 IIHF World Junior Championships.

Ahead of the 2018 Four Nations Cup, Pearn told the Canadian Press that he “would probably be willing to make a commitment to [coach] the next Olympic Games.” Pearn was also the first hire for new general manager Gina Kingsbury, who took over the role from Davidson.

"Winning is important. It really is," Kingsbury told the Canadian Press. "When it comes down to the first Four Nations of a new quad, to me it's about getting back to a winning culture.”

The Canadians would fall 3-2 to the Americans yet again in the preliminary round, their eighth straight loss to their rivals at the women’s worlds. But this time there would be no gold-medal rematch. Finland, playing on home ice in Espoo, upset Canada 4-2 in the semifinal to advance to the final. Finnish goaltender Noora Räty finished with 43 saves and stymied the Canadians’ attack.

“We should be really disappointed,” Pearn told TSN after the game. “We played much, much better than we showed today earlier in the tournament… Very disappointed that when we hit some adversity, we seemed to completely lose track of what it is we do as a team.”

Canada would regroup and easily take bronze with a 7-0 win over Russia, but it was still the team’s worst-ever finish at a major tournament.

“You have to be happy with the end result,” Pearn said postgame. “I think the takeaway for the whole group is we need to change some things. We need to get better. There’s no question that we’re capable of being very successful, but that’s not going to happen until some changes are made.”

But Pearn wouldn’t get the opportunity to face the United States in another tournament. The 2019 edition of the Four Nations Cup was cancelled after ongoing contract disputes between the Swedish Ice Hockey Federation and the women’s national team players.

Canada and the United States played in a two-game exhibition series in place of the tournament, but Ryan was head coach for the mini-series, with Pearn serving as an assistant. Canada won both games.

At the end of the year, the Canadians and Americans began a five-game Rivalry Series, with Pearn back as head coach and Ryan named an assistant. The United States won the opener 4-1, and three days later edged the Canadians again by a score of 2-1, dropping Pearn’s record against the Americans to 2-6.

That spelled the end of Pearn’s tenure. On Jan. 9, 2020, Pearn was fired as head coach, with Ryan taking over. Kingsbury told the Canadian Press that a change in leadership was needed.

“Sometimes you respond differently to different leaders, and I think this was the change this particular group needed,” she said. “We certainly don’t regret having him on board for the past year and a half. Sometimes, someone else needs to be crossing the finish line.”

This brings us to the Ryan era for the Canadian women.  He has been on the coaching staff since 2016, including winning silver with the squad at the 2018 Olympics.

Ryan took over as Canada’s head coach for the final three games of the Rivalry Series against the Americans in 2020. While Canada won Ryan’s official debut as head coach by a score of 3-2, the team dropped the last two games of the series, losing four of the five total games.

Ryan was set to return to his home province this past spring for the IIHF Women’s World Championship, which was scheduled to take place in Halifax and Truro. However, the government of Nova Scotia ultimately cancelled the tournament, resulting in it being rescheduled and moved to Calgary in August.

In May, Ryan was named the head coach of the team for next year’s Olympics in Beijing.

"Even if he hasn't had the chance or the opportunity to have a whole lot of camps or events with our group, even how he's managed our group in this pandemic, and the relationships he's built, the trust he's built, these players want to play for him. He is the guy to lead us for sure."