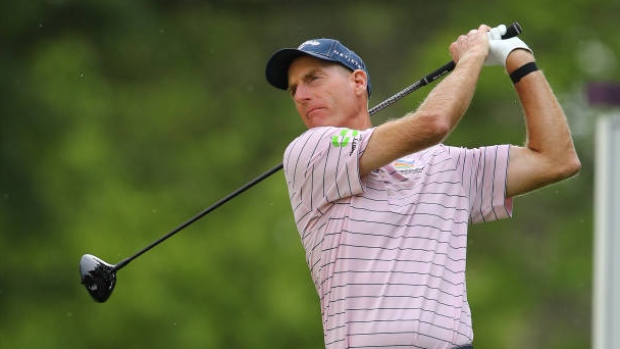 PEBBLE BEACH, Calif. — Jim Furyk birdied four of the last six holes for an 8-under 64 and the first-round lead Friday in the PGA Tour Champions’ Pure Insurance Championship.

Trying to join Arnold Palmer and Bruce Fleisher as the only players to win their first two starts on the senior tour, Furyk had a one-stroke lead over Ernie Els, Cameron Beckman and Stephen Leaney.

“I think some of it’s I’ve been playing on two courses that I know very well,” said Furyk, The Ally Championship winner last month in Michigan in his tour debut. “I played 15 events at Flint, I probably played over 20 events here at Pebble Beach. The good news is I got to start on two places I was very comfortable with, enjoy both golf courses.”

Furyk made four birdies in a five-hole stretch on his opening nine in the afternoon round. On his second nine, he birdied the par-5 second, rebounded from a bogey on the par-4 third with a birdie on the fourth and reeled off three straight on Nos. 6-8.

“I know this game can be just as mean as well, so really thankful to get off to a good start,” Furyk said. "But still have a great golf course in front of me and two more days, so just want to keep trying to do the same thing and keep making some birdies.”

“That’s very unusual,” Els said. “Normally, you make a hole-in-one every three years. I’ve made one every two, three weeks, so it’s ridiculous. I should go to the casino because maybe there’s a bit of luck involved.”

Els lost a playoff in his senior debut in Hawaii in January in the season opener, then won the Hoag Classic in March down the California coast in Newport Beach.

Because of the COVID-19 pandemic, the event is being played without spectators and juniors from The First Tee program. The amateur field was cut to 80.

Furyk was excited to get back on the course Saturday morning.

“Get home, get some rest, get dinner and right back at it in the morning,” he said. "Definitely had some moisture sucked out of the golf course this afternoon and greens started firming up, so it will be good to get out there with some softer greens in the morning.”