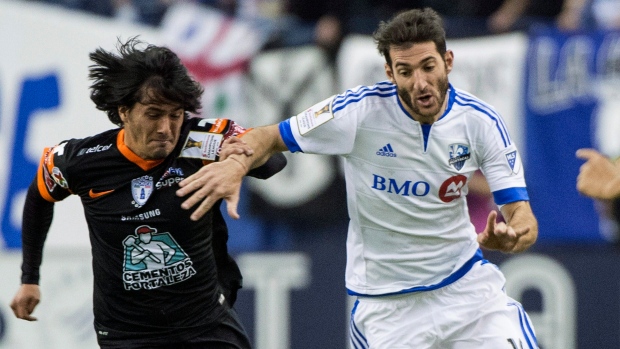 Not so much a makeover for the Impact, an entirely reshaped and recalibrated squad will take to the pitch in 2015. Via the various drafts, a pair of loans, two trades and picking up two players out of contract, 12 new players have been acquired by the Impact.

Not done with wholesale changes to the squad, assistant coach Nikolaos Kounenakis was let go and replaced by Enzo Concina, a member of the Impact's 1994 championship team. Concina spent the 2014 season with DC United, the club which finished top of the Eastern Conference and had the joint best defensive record in the league.

In the vast majority of cases, at least on paper, the new faces at Saputo Stadium are an upgrade on the players they have indirectly replaced. For a club though which scored only 38 goals last season, the one player they coveted most, a natural goal scorer with a pedigree similar to Di Vaio, has proved elusive. For a team which was amongst the MLS' very worst defensively, a brand new centre half pairing in Bakary Soumaré and Laurent Ciman should ensure a far more cohesive defensive structure. In 2014 the Impact conceded a number of soft goals at crucial moments in matches. Another undoing was way too many goals originated from set pieces.

Much will be expected from Donadel and Reo-Coker in the engine room, at the point of attack and in their willingness to get up and down the pitch. If Ignacio Piatti can display the form which we got a terrific glimpse at in 2014, where injury unfortunately limited him to just six appearances after signing with the club last July and if the 30-year old Argentine can stay injury free in 2015, it will feel like the Impact have signed a brand new Designated Player.

Goals must come from not only the forwards. Justin Mapp is not a renowned scorer by any stretch of the imagination, he has never scored more than three goals in a season since joining MLS with DC United back in 2002, but I expect him, by getting into those vital areas instead of looking to lay the ball off, to make better use of a very clever left foot when opportunity presents itself. Andrés Romero is another player capable of scoring more goals, 2014's MVP managed six in 29 matches last season.

As much as bringing in better calibre players places the Impact in the category as legitimate playoff contenders, in a league where fully twelve of twenty clubs will make it to the post-season, better use of the bench is in another key area which needs wholesale improvement this season. Too often in 2014 the substitutions had little or no desired effect on the eventual outcome. With a much deeper squad making the correct substitutions, at the key moments becomes even more imperative. As the long grinding MLS season plays itself out this may well go a long way in determining if the Impact can turn 2014's flat water into 2015 vintage playoff wine.