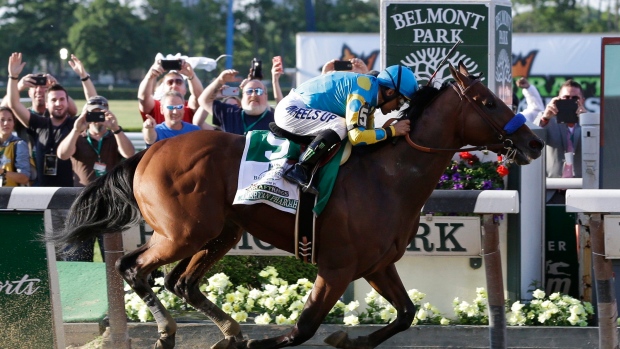 On the heels of American Pharoah's dramatic sweep of the American Triple Crown series, TSN today confirmed its broadcast schedule for  the network's exclusive live coverage of the most prestigious events in Canadian horse racing, including every race from the historic Canadian Triple Crown: the Queen's Plate, Prince of Wales Stakes, and Breeders' Stakes.

In partnership with Woodbine Entertainment Group, TSN's exclusive live coverage of marquee Canadian horse racing events kicks off with the Woodbine Oaks presented by Budweiser along with the Plate Trial on Sunday, June 14 at 4:30pm et on TSN.

"We are once again thrilled to showcase the Canadian Triple Crown in partnership with TSN and Bell Media," said Doug Flaherty, Senior Director of Broadcasting of Woodbine Entertainment Group. "Woodbine continues to be the home of world-class horse racing, and TSN's longstanding reputation as a heralded storyteller will augment our outstanding events and give racing fans an exceptional viewing experience."

"Excitement for horse racing is at a fever pitch, and TSN is proud to partner with Woodbine Entertainment Group and showcase another season of the biggest horse racing events in Canada," said Shawn Redmond, Vice-President, Programming and Marketing, TSN. "We're excited to feature Woodbine's stacked roster of marquee horse racing to fans across the country, highlighted by the Queen's Plate, the jewel of Canadian horse racing."

TSN's live coverage of the Canadian Triple Crown begins with the 156th running of the Queen's Plate – regarded as the premier event in Canadian horse racing – on Sunday, July 5 at 4:30pm et on TSN1, live from Woodbine Racetrack in Toronto.

The Canadian Triple Crown shares the same race distances as its U.S. counterpart, however the uniqueness of the Canadian horse races is that each event is contested on a different racing surface: Polytrack, dirt, and turf.