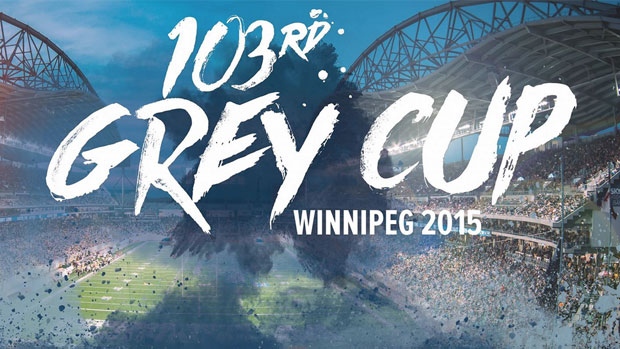 TSN’s exclusive live coverage of the 103rd GREY CUP presented by Shaw is available for live streaming and on-demand viewing to TSN subscribers via TSN GO. RDS delivers live French-language coverage beginning at 5 p.m. ET. TSN’s coverage of the game will also air live on ESPN2 in the United States.

TSN’s all-star team of broadcasters is on-site at Investors Group Field in Winnipeg for the 103rd GREY CUP presented by Shaw:

TSN platforms feature a comprehensive slate of programming surrounding the 103rd GREY CUP presented by Shaw, including the following highlights:

Throughout the day, the CFL ON TSN panel checks in from Investors Group Field with GREY CUP updates, news, and analysis, including the teams’ final walkthroughs before the big game. Additional highlights include:

Interview with CFL Commissioner Jeffrey Orridge
Segments featuring TSN’s THE REPORTERS, hosted by Dave Naylor alongside Bruce Arthur, Steve Simmons, and Gary Lawless
TOP 50 CFL PLAYS OF 2015 at 12:30 p.m. ET on TSN3, counting down the 50 best plays of this season
Later that night, an encore presentation of the 102nd GREY CUP airs at 8:30 p.m. ET on TSN2, a game that saw the Calgary Stampeders win their seventh championship in franchise history with a 20-16 victory over the Hamilton Tiger-Cats.

Live from Investors Group Field, TSN primes fans for kickoff with five hours of pre-game coverage hosted by James Duthie and SPORTSCENTRE’s Darren Dutchyshen and Kate Beirness. The pre-game show also features CFL ON TSN host Rod Smith and the network’s team of Insiders and experts teeing up the game from every angle.

Edmonton Eskimos’ Defensive End Odell Willis:The key to Edmonton’s defence is this lightning-quick sack machine; a defender so fast off the line that his own teammates often think he has gone offside.

Ottawa Redblacks’ Wide Receiver Brad Sinopoli: An award-winning quarterback for the University of Ottawa, Sinopoli was converted to a receiver in 2013. In his return to the nation’s capital this season, he recorded 1,000 yards receiving, becoming a major force on Ottawa’s standout offence.

Johany Jutras’ Photographic Odyssey: TSN tells the story of freelance photographer Johany Jutras, who sold everything she owned and travelled to every CFL city this season, documenting scenes from around the league for her book Our League, Our Country.

50th Anniversary of the Wind Bowl: A look back at the 53rd Grey Cup, known in CFL lore as the Wind B With Hamilton taking on Winnipeg at Toronto’s CNE Stadium, high winds forced coaches Bud Grant and Ralph Sazio to agree on unprecedented rule changes, creating one of the most unique title games in CFL history.

Journey to the Grey Cup: Redblacks and Eskimos: Two mini-documentaries focusing on the East and West Division champions and their season-long journeys to the big game.

In this year’s CFL championship game, the Edmonton Eskimos make their first appearance in the title game since 2005, and look to win their 14th Grey Cup in franchise history. They take on the upstart Ottawa Redblacks, who entered the league as an expansion team last season. The 103rd GREY CUP presented by Shaw marks the first time an Ottawa team has competed for the title in 34 years.

CFL Commissioner Jeffrey Orridge presents the Grey Cup to the championship-winning team, as well as the awards for Most Valuable Player and Most Valuable Canadian. The CFL ON TSN panel provides post-game analysis and conducts live interviews with players and coaches on the field leading up to SPORTSCENTRE after the game.

TSN Digital platforms complement the network’s extensive television and radio broadcast of the 103rd GREY CUP presented by Shaw with the following highlights:

The unveiling of the TSN Play of the Year Showdown: Canadian Football Edition winner

Instant video features and in-game highlights, plus a full breakdown of the championship game matchup complete with news and analysis

TSN Radio broadcasts live from radio row in Winnipeg, from tomorrow (Wednesday, Nov. 25) to Friday, Nov. 27, with highlights including: