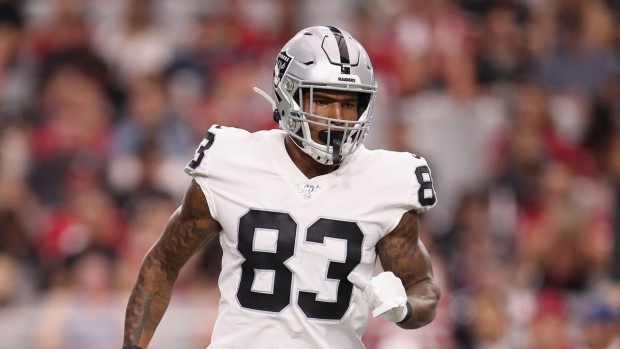 As we did last season, our team at the TSN Edge is going to preview each NFL division before the Tampa Bay Buccaneers and Dallas Cowboys kick off the 2021 season on Thursday, Sept. 9.

This year, we’re going to take a look at the Super Bowl and divisional odds for all 32 teams, and dive into one storyline that we’re keeping our eye on.

In this AFC West preview, we’ll look into the value of already backing the Kansas City Chiefs' Super Bowl odds, why this season might be very different for the Los Angeles Chargers and Denver Broncos, and the value that Las Vegas Raiders tight end Darren Waller brings to the table.

If you know me, then you shouldn't be surprised that I like Kansas City at +500 to win the Super Bowl this year. Not because I think they’ll win it, but because of the value. Last season the Chiefs began the year at +450 to repeat as Super Bowl champions, by the time the playoffs rolled around they were +180. Value, it’s a beautiful thing. The goal with Kansas City is to get them at the longest number possible to win the Super Bowl. Because let’s face it, they’re going to be around in the final weeks of the season, it’s just a question of if they can get over the hump. The Chiefs will go into this season with an entirely new offensive front, highlighted by the additions of left tackle Orlando Brown Jr. and left guard Joe Thuney and once again return all of their key players at skill positions. On defence, safety Tyrann Mathieu is back to lead the way on a unit that struggled at times last season. The Chiefs will be tested this season as they play a tough schedule with games against the Cleveland Browns and Baltimore Ravens to open the season. But if Patrick Mahomes (+500 to win MVP) stays healthy this team will make the playoffs, and when this team makes the post-season, your +500 Super Bowl ticket will be worth the price of admission. Don’t wait until Kansas City is a three-point favourite in the Super Bowl to back the Chiefs, jump on this early.

Alright, hand up ... I liked the Chargers last season. And guess what, I love them this year. You don’t need me to tell you how dominant Justin Herbert’s rookie season was. His 4,336 passing yards and 31 touchdowns led him to win Offensive Rookie of the Year, but his play wasn’t good enough to overcome the disaster at head coach that was Anthony Lynn. It seemed like week after week Lynn found new ways to coach Los Angeles out of games. Let me remind you just how bad it was. The Chargers lost six games by seven or fewer points last year, letting a 17-point lead get away in the second half at Tampa Bay and blowing a 10-point lead at New Orleans, where Herbert passed for four touchdowns with no interceptions yet walked off as the loser. And despite all that they still found a way to win seven games. With Lynn out, and a boatload of talent on both sides of the ball, I’ve spent the last several weeks mentally preparing myself to once again back this Chargers franchise. Look at their schedule, they project to be favourites in at least 10 games this season, and I think they’ll pull off an upset or two as well. I can see this team going at least 10-7 this year and hitting the over of 9.5 wins.

There’s a wonderful saying in football. If you have two quarterbacks, you have no quarterbacks. In Denver, I think they have two quarterbacks. Don’t get me wrong, I love Teddy Bridgewater, any quarterback that can go 35-13-1 against the spread to start his career is going to have a fan in me. But, sadly the NFL doesn’t care for your ATS records. His straight-up record is a much different, but still respectable 26-23. And after a horrific knee injury saw him lose his starting job in Minnesota, it seemed like last season was a big opportunity for Bridgewater to grab a QB1 role once again and run with it. Unfortunately his 15 touchdowns and 11 interceptions while going 4-11 just wasn't going to get it done in Carolina. Now, he’s beaten out Drew Lock for the starting position in Denver, but I can’t help but wonder if we’ll see Lock take the field when Teddy struggles. The thing is, Lock wasn’t very good last year either. His 16 touchdowns and 15 interceptions saw him go 4-9 in 2020 and bring his overall record in the NFL to just 8-10. Denver will get several pieces, including Von Miller, back on defence and the Broncos open the season with three very winnable games. But even if they find a way to start 3-0, the schedule gets a lot more challenging and I just can’t find a path to nine wins this season.

Do yourself a favour and get some exposure to Darren Waller this season. Take the over on this prop, maybe his touchdowns (O/U 7.5), or draft him in fantasy. I don’t care what way you have to do it, just do it. Waller, after a very slow start to his career, has become one of the best tight ends in the game over recent years. He clearly is the No. 1 target for Derek Carr and the two of them have chemistry that just leaps off the television screen. One thing that Waller has been great for these last two seasons (besides his 12 touchdowns, 197 catches and 2,341 yards) has been his durability. The tight end has suited up in all 32 games the Raiders have played in since 2019. And with the added game this season, for Waller to get over the 1100.5 mark, he’ll need to average 64.7 yards per game. That's something he has done 16 times over the last two years. In 2019, his breakout season, he went for 1,145 yards with 90 catches. Last season he followed that up with 1,196 yards and 107 receptions. If you watched "Hard Knocks" a few seasons ago, then you should know all about Waller’s story. If you didn’t, I highly encourage you to go learn about him a little bit. It makes him that much easier to cheer for.