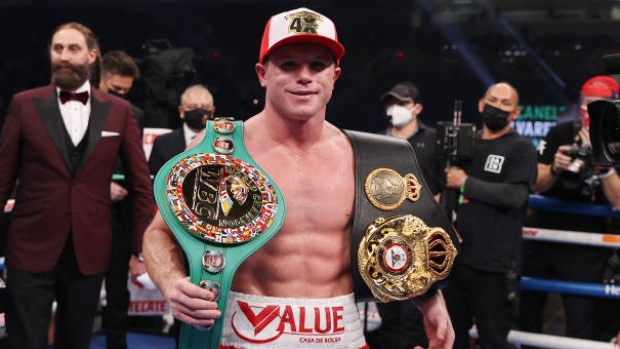 Sure, Rocky was probably talking more about battling through adversity in life as opposed to gambling, but we can never be too sure.  Now, before I turn this into a list of my favourite motivational quotes from sports movies, here are my knockout picks of the week headlined by the biggest name in boxing.  Clear eyes, full hearts, can’t lose, let’s go!

Have you ever been on a date and are so confident in the outcome that you’ve already purchased expensive non-refundable concert tickets months down the road? This is essentially the situation Canelo Alvarez finds himself in this weekend. And the confidence - well, it’s warranted.

Canelo Alvarez is according to many the pound for pound best fighter in the world, accumulating a 54-1-2 record and 36 knockouts. His only loss came at the hands of Floyd Mayweather in 2013 via majority decision, when he wasn’t even close to entering his prime.  Fast forward to present day, Canelo has won multiple world titles across three weight classes, constantly chasing after big fights in the sport in hopes of further cementing his legacy.

This is a nice change of pace from an era where we see tune-up fights for big bouts that never seem to materialize, as well as Youtubers throwing sloppy hooks at one another hoping to land a miracle shot.  Canelo currently holds the WBA and WBC super middleweight titles and has his sights set on unifying the division, with plans to take on a tough 30-0 opponent in Billy Joe Saunders in May for the WBO belt. Now, this all seems great pre-planning months in advance, but what happens when something disastrous happens on the first date putting a stop to all your future plans that you’ve already made in your head?  Well, that question will be answered on Saturday, with Canelo Alvarez set to fight mandatory WBC challenger Avni Yildirim.

Alright, let’s save the dramatics here.  Despite various promoters urging Canelo and the fans not to overlook Yildirim, it’s simply not going to happen.  Yildirim holds a very respectable record at 21-2 (12 KOs) and has earned his spot as the WBC mandatory challenger.  However, in his two losses, he was overwhelmed and outboxed by Chris Eubank Jr. who won via knockout in just three rounds, and most recently a technical decision loss to Anthony Dirrell. Dirrell and Eubank Jr. are phenomenal fighters, but even they’re not in the same league as Canelo. In boxing, a sizeable underdog usually has a punchers chance at the very least. Unfortunately for Yildirim, Canelo has proven to have quite the chin on him, taking thunderous shots from the likes of Gennadiy Golovkin and barely even batting an eye.

Alvarez has the sizeable speed and power advantage in this fight. He will overwhelm Yildirim, and will look to get him out of there fast to avoid any unnecessary damage for his super fight in May with Saunders.  This is simply not a question of who wins, but how long it takes.

On the other side of the world in Auckland, New Zealand, where civilization has seemed to continue on with relative normalcy, Joseph Parker returns to the ring after a year layoff to take on a familiar foe in 19-0 fellow Kiwi, Junior Fa.

The 27-2 (21 KOs) Parker is the former WBO heavyweight champion and has fought the upper echelon of the division for quite some time.  In fact, his first loss came at the hands of reigning defending champion, Anthony Joshua.  Even in defeat, Parker proved he could hang with the best, becoming the first fighter to take (the then-undefeated) Joshua the distance.  Parker lost another tough decision to a top British heavyweight Dillian Whyte following the Joshua fight, but since then has been on an absolute tear, recording three knockouts in a row.

Parker and Fa have a rivalry dating back to the amateurs, facing off four times over this portion of their careers.  Fa took two closely contested bouts on points, while Parker won on a wide margin, and also managed to force a standing eight count in the second round of their second fight, before winning easily on points.

Despite the two opponents splitting the series, the amateur and professional boxing circuit are totally different from one another. The main objective in the pros is to inflict damage and score a knockout, while amateurs are graded on a point system.  Whichever way you put it, the undefeated heavyweight has a daunting task ahead of him, about to take on without a doubt the biggest test of his professional career.  Fa believes he has the ability to beat his rival countryman. The funny thing about belief though, is that sometimes it’s a long way from reality.

Parker has that experience and confidence from fighting with the heavyweight elites that Fa simply does not have.  With just 10 knockouts in 19 bouts against average opponents, I wouldn’t rush to bet my mortgage on FA delivering a KO against a man who has who has gone the distance with Anthony Joshua.  Parker on the other hand, knows an emphatic victory solidifies bigger fights en route to another title shot. Parker has been saying all the right things, telling the media on multiple occasions he will knockout his rival countryman.  He’s proven he has the power to do so and will be looking to back up his words throughout the contest. It’s always risky picking a knockout against an undefeated fighter, but with Fa stepping into the hardest match of his career, you better believe his chin will be tested at one point or another. If you want to play it safe, take Parker outright here, or trust in Parker’s power, experience and words that this will end in a knockout.  If he forced a standing eight-count in the amateurs, you better believe he could replicate that damage in the pros, and I bet that’s in the back of Fa’s mind as well.